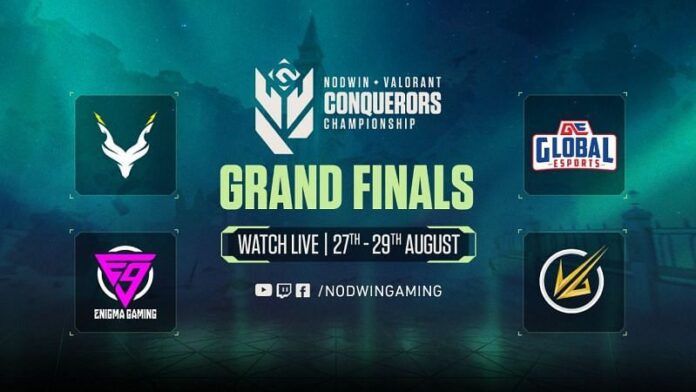 At the end of May, Riot had announced its collaboration with Nodwin Gaming to give the South Asian region its first-ever official Championship event and to be a part of the Valorant Champions Tour (VCT) Circuit. The Conquerors Championship event will lead the winner (Global Esports) to the APAC Last Chance Qualifier (LCQ) and from there onto the VCT Champions event, to be held later in November.

Global Esports’s Ganesh “SkRossi” Gangadhar led the way at last week’s Valorant Conquerors Championship Grand finale against regional counterparts Velocity Gaming. The Indian side had initially qualified for the main VCC event from the second iteration of the Indian Qualifier and is currently led by Bhavin “HellrangeR” Kotwani.

Let’s take a look at some memorable VODs packed by Nodwin in their fragmovie from the Indian derby.

SkRossi wins it for Global Esports

After getting his first pick over Sagnik “hellff” Roy, SkRossi made his way back to mid only to flank and catch two of VLT’s agents, unaware of the former. The flank further helped Bhavin “HellrangeR” Kotwani to take a breather as the duo decided to rotate over to the B-site, leaving Marzil clueless knowing the latter’s location to be somewhere around the A-main. SkRossi had the final laugh over Marzil as the whole VLT had been caught off-guard.

Now on the defense, SkRossi made light work of Velocity Gaming, by successfully fending off his team off VLT’s attackers. With the Bladestorm ability on his Jett, he first swirled his knife to eliminate Marzil who was caught securing the ultimate orb. Velocity Gaming lost two more players in the run of dismay towards the B-site giving Mr Ganesh Gangadhar 3 kills to his name.

HellrangeR, the line of solitary.

With the scores tied up 9-9, it had to be either VLT or Global Esports who were to take a lead, going forward in the match. This was indeed addressed by Mr Bhavin “HellrangeR” Kotwani in the form of a perfect A-site anchor which saw him running away with 4 kills and a 11-10 lead over the Anuj “Amaterasu” Sharma led side.

Yes, SkRossi aced this round. But under what circumstances? It wasn’t easy for the fellow prodigy as Global Esports were on the course of charting a comeback and that’s when SkRossi popped off with his Operator. In an attempt to defend the A-site on Ascent, SkRossi had positioned himself in the Vines avenue only to draw first blood in the 17th round. VLT still continued to hit the A-site only to be sniped down from right, left and center by the one and only SkRossi.

With SkRossi all over Velocity Gaming, the duo of Jayanth “skillZ” Ramesh and Abhirup “Lightningfast” Choudhury showcased a cumulative effort to get it done for Global Esports as they both racked up a combined 4k to deny VLT, the spot at the APAC Last Chance Qualifier.

You can catch the respective highlights below in the video uploaded by Nodwin on their YouTube Channel.