Trash talk, smack talk, shit talk, or whatever on earth you want to call it, the delicate part of putting someone in their place with words has always been an integral part of esports history. Oh wait, have you heard that before somewhere? What am I writing about?

We at TalkEsport are here to headline a primitive banter, put in place first by Carlos “ocelote” Rodriguez, CEO of G2 Esports. It all started before Sentinels locked horns with G2 Esports in their Group fixture at the ongoing VCT: Stage 3 Masters in Berlin.

We all have known that Sentinels have been berserk in the North American Valorant Region with every single major event in their bag. They have been ranked #1 across nearly a year now and since the addition of Tyson “TenZ” Ngo to their active squad, their synergy has sky-rocketed to new heights. Well, this is not the exact same thing with G2 Esports, sitting on the 5th position of the rankings table (Thank you, Liquipedia), although they did manage to qualify for the Berlin event following a plethora of roster changes before making it to LAN.

Right before their match against Sentinels, Carlos and G2 Esports rented a plane only to fly around and deliver a special message for their opponents which said, “FUCK SENTINELS” in capital and bold. As said, they posted a video that saw the plane fly around with the banner on their G2 Esports’ Twitter handle.

In addition to this, they even updated their Twitter banner which has a picture of Oscar “mixwell” Cañellas smiling over the whole flight situation. 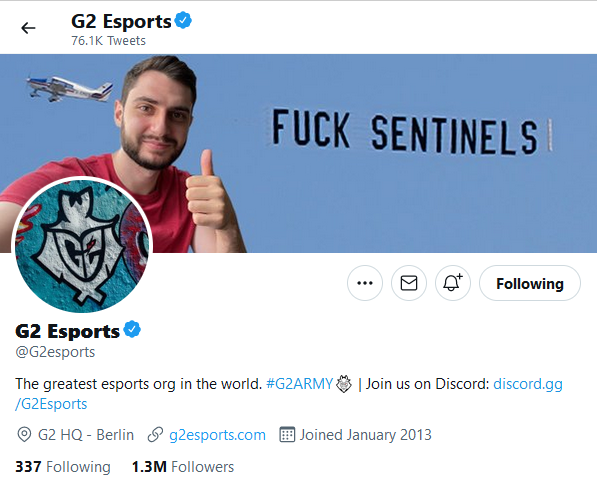 Sentinels sure did win the match against G2 Esports but it still wasn’t enough to defy what Carlos came up with. The North American organization soon hit back with a video on Twitter, captioned, “It’s a bird, it’s a plane, it’s (refer to the tweet embedded below)

This has undoubtedly been the most premium sarcastic banter at the Valorant Champions Tour as both Sentinels and G2 Esports have been wanting to play off against each other.