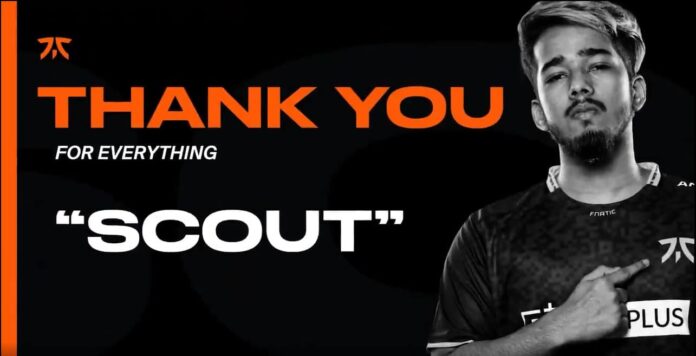 The gaming content creator and PUBG Mobile Pro Tanmay ‘Scout’ Singh completely departs from the European esports organization Fnatic. Scout was among the very first players to get signed by Fnatic when they arrived in India and one of their star players finally parts ways with the roster.

Scout is one of the biggest personality in the PUBG Mobile and Indian Gaming community as a whole. He has been a part of Fnatic since the very start where the star-studded lineup of Team XSpark was picked by Fnatic as a bid to enter the mobile gaming market in India.

His departure from the lineup may not be very surprising for many as there have been many instances of internal issues between the players and management. This announcement officially marks the end of Scout’s journey under the Fnatic as he will no longer represent the Black and Orange.

Fnatic was the very first international organization that entered the PUBG Mobile esports scene in India and their roster was filled with potential. The roster however faced a rocky path after and did not live up to the expectations of their fan base. The did grab some wins along the way and even won the PMAS 2019 trophy but eventually, their performance dropped down in the first half of 2020.

Scout was also loaned to another organization Orange Rock for the PUBG Mobile World League: East where his performance alongside the new team was top-notch. The roster event went toe-to-toe against the reigning champions Bigetron RA and almost snatched their title. This was the best performance any Indian PUBG Mobile team has ever put up on an international stage and while the other half of the world was not competing, Orange Rock still did an amazing job to leave a mark with their output at the event.

This departure opens up a large number of possibilities for Scout and it is highly possible that the player might join Orange Rock as a player or may look to nurture his own team XSpark who won PMCO India 2020. Scout is regarded as one of the best PUBG Mobile players in the world in terms of game mechanics and hence he can play a big role in upcoming roster changes for the Indian region.