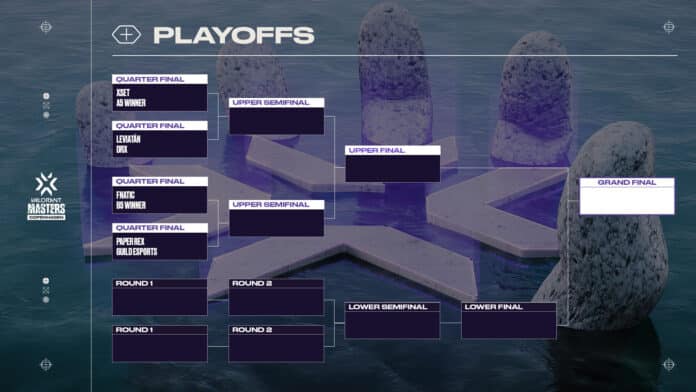 The playoffs follow up immediately, with the draws already declared by Riot Games.

The Quarterfinals will probably start with NA#1 XSET set to play the winner of the Group A decider, which will be played today between Optic Gaming and KRU esports.

Yesterday, Optic Gaming defeated the Brazilian #1 LOUD in a close-fought series to stay in contention. KRU esports lost to Guild a day before after three OTs.

The second quarterfinals would have Leviatan, the LATAM#1, taking on the Korean power of DRX, who has been showcasing what they are capable of on the international stage after defeating FPX and Northeption with a clear definition.

The third quarterfinals would have the tournament favorites and the EMEA #1 Seed Fnatic waiting for their opponents, who’d be either the Japanese Northeption or EMEA’s second seed FPX.

FPX started strong despite the substitute in the tournament by beating XERXIA in a close-fought series. Still, they fell to DRX to play Northeption today, who themselves, after a loss to DRX, beat XERXIA to play the Group B Decider.

APAC #1 Paper Rex will play Guild Esports in the last quarterfinal. Guild Esports was the first team to qualify from the group stage to the playoffs, and Guild beat Optic Gaming and KRU Esports to reach the playoffs.

The group stage was one of the most hype tournaments to date, with only one match being a one-sided affair, and has seen the most number of OTs in a valorant tournament to date. All matches have always gone the distance, with DRX being the only team that seemed a bit better than their contemporaries.

The playoff fixtures seem exciting, too, with the only downside being NA and EMEA representatives would play each other in the quarterfinals. The playoff stage is a double elimination bracket, and all the teams get a buffer of one loss.

The matches would start at 15:00 GMT and start tomorrow as the group plays conclude today.