ESL India’s final slide of India’s one of the largest gaming events, Premiership is just around the corner. We are roughly a week away to witness ESL Masters 2016, which is scheduled to occur within the Delhi ComicCon festival. The event is held from 9th until 11th of December at NSIC Grounds, Okhla New Delhi.

ESL Masters 2016 will feature eight teams qualified and invited teams from both DotA 2 and CS: GO, excluding eight top players from Clash Royale. The players and teams will battle for the prize pool of over Rs. 1.8 million INR. Under CS: GO, prominent teams such as Invisible Wings, Brutality, Overcome, SemperX, D2D, and Elements will participate. In DOTA 2, the competition will be fierce as teams such as Beyond Infinity, Invisible Wings, XRG, and Standin 5 will fight for the ultimate prize. A team from Bangladesh who were crowned victors at Challenger 2 will join them. For Clash Royale, Mrin, PP, Devilstwin and Darknite will return to contest the crown. Joining them will be the four winners from online & offline open qualifier playoffs, which will be held on the first two days of the final event.

Alongside the competitive hardcore esport games, ESL Masters 2016 will host a cosplay competition, winner of which will travel to ESL One Genting, happening in Malaysia from 6th to 8th Jan 2017. Just Dance will also have its share of the stage, dancing the antic hay will be seen frequent, out of which the best ones will be deported to the main-stage to break a leg to win cash prizes.

Speaking on occasion, Akshat Rathee, MD, NODWIN Gaming said, ‘I am very excited for this finale that marks an important achievement in the eSports industry. We feel immense pride to say that our continuous efforts have led to the beginning of the eSports boom in India. This platform gives an opportunity to the e-gaming enthusiasts in the country to explore their potential and build a career in gaming.’

ESL has been conducting top class tournaments in more than 13 regions around the globe. Partnered with an Indian company, NODWIN Gaming, ESL launched as the ESL India Premiership in early 2016. With a large prize pool amounting to more than Rs. 42,00,000 (~$64,000) and an array of gaming events, Premiership has revolutionized the Indian e-Sports scene over the past few months. ESL India has hosted several flagship events in India this year under the banner of Premiership. The games featured were CS: GO, DotA 2 and Clash Royale. Undertaking their scheme of event execution and promotion, NODWIN fragmented the events in three different parts based on distinct professional levels of the game.

ESL India Premiership began with their kick-off event, Starter Cup #1 which was played online and the winner of the cup had an opportunity to play at the Challengers #1. A total of six starter cups were hosted and two challenger cups which determined the teams participating at ESL Masters 2016.

The Challengers have already benchmarked new standards in Indian E-sports, which have been loved by the online and on-ground audience alike proved by the steep rise in online viewership with an extraordinary number of almost 3 Lacs unique viewers throughout the span of the event.

ESL Masters 2016 will mark the end of an immensely successful year for Indian eSports. ESL India Premiership, along with its partners- HYPERX, TWITCH & ASUS (ROG) has set the standards for professionalism and quality required for similar events in the future. 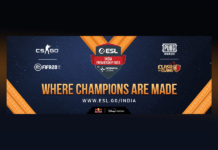