BLAST Pro Series, the organizers, have revealed the on-air crew for the upcoming BLAST Pro Series Los Angeles. The lengthy lineup consists of 13 talents including the stage host, interviewer and task host alongside 4 analysts and 3 pairs of commentators.

The event will be held this weekend at HD Buttercup Building. Six teams from Europe, America and Australia will be attending the $250,000 USD event. The tournament will follow best-of-one round-robin group stage format where each team will play against the other five teams.

Three live matches will be streamed in three different languages (English, Russian & German) at a time during the round-robin stage.

Cloud9’s revamped roster will be making it’s foremost appearance this weekend in Los Angeles while it is still unclear whether FaZe Clan will be attending with Filip ‘NEO’ Kubski or Marcelo “coldzera” David. Certain sources rumoured that FaZe is negotiating to acquire the service of Brazilian star. 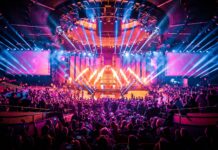