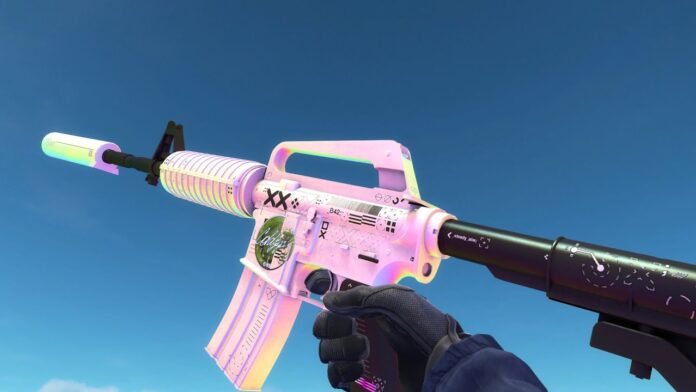 A crucial component of Counter-Strike: Global Offensive is its skins. Millions of players worldwide will spend real cash for a stunning in-game item. To this day, an extremely large number of them have been developed.

Prices range from a few pennies to tens of thousands. Many CSGO skin sellers today make a living out of their trades and have done that over years. Some of them do sell skins on Steam, while others prefer third-party sites with similar features.

Here are the most popular skins in CS:GO

Today we are here to discuss the top 5 popular skins in CS:GO

When we talk about the Printstreams, this skin definitely needs to be on any list of the finest M4A1-S skins in CSGO. The iridescent sheen of the Printstream is one that cannot be found on any other M4A1-S skin, making it a fan favorite among professional players.

The M4A1-S Prinstream has a premium price tag of $290 due to its great demand as well as its distinctive paint job. The skins look better in-game than in photos. Stickers from the Katowice 2014 video game appear like they were made to be shown on the Prinstream, as it is a fantastic platform for sticker crafts as well.

If the player is skilled enough to use it, this weapon has the potential to completely alter the course of the game. According to the available data, the Desert Eagle is by far the most often used firearm in the eco-rounds.

On the other hand, the Printstream skin has, for a significant amount of time, enjoyed a high level of popularity among the target demographic. The simplistic yet majestic design is one of the most evident attractions, as is the relatively modest price.

Consequently, the role of the sniper is one that almost every player has experimented with at some point in his or her career.  Since the AWP Atheris was released four years ago, it has seen consistent use by a wide variety of users, including those who play competitively as well as those who simply want to have some fun.

2019 saw the addition of this new skin. It was one of the newest additions to the St. Marc collection, and it was this particular weapon.

Because of the polished and understated aesthetic, it exudes an air of self-assurance and potential. It’s perfect for players that don’t have a lot of money to spend on skins but yet want a popular item.

For more guides and news related to Counter Strike : Global Offensive, make sure to follow TalkEsport on Google News.