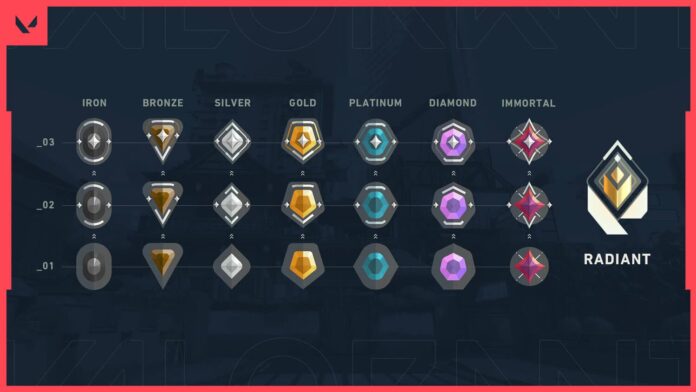 Valorant is a highly competitive game. Players are constantly testing their skills against one another in attempts to earn their place among the best players in the world. Due to this competitive nature of the game, a ranking system is essential for any shooter like this.

Riot’s ranking system designed for their FPS title Valorant consists of several rank groups. Each rank group is further divided into three subgroups which the players must cross to proceed to the next skill level.

The rank groups consist of Iron, Bronze, Silver, Gold, Platinum, Diamond, Immortal, and Radiant. The Radiant is the highest attainable rank in the game and is the only rank which doesn’t include any sub-ranks.

Completing 20 unrated matches enables a player to queue for the ranked mode. Playing ten games in ranked gives the player their initial rank which generally ranges from Iron 1 to high diamond.

Are you curious to find out how the other players are performing compared to you? That’s why we’re gonna show you a detailed chart showing the rank distribution of Valorant players which you can use to get an estimate of how good you are at the game compared to an average player.

Here’s the rank distribution of Valorant as of August 2020. The data was taken from websites such as Blitz and put together by Esports Tales.

You can see a tabular representation of the data below.

In case you’re looking for what percentile of players you belong to, you can take a look at the following table. For instance, If you’re Gold 1, you’re slightly better than an average player and belong to the 50.80 percentile.

The data reveals that the density of players in the ranks increases from Iron to Gold, with the exception of Iron 1 which contains more players than its successor. After reaching a peak at around Gold 2, the density steadily falls from Gold all the way to Radiant, which only accounts for less than 0.5% of the players.