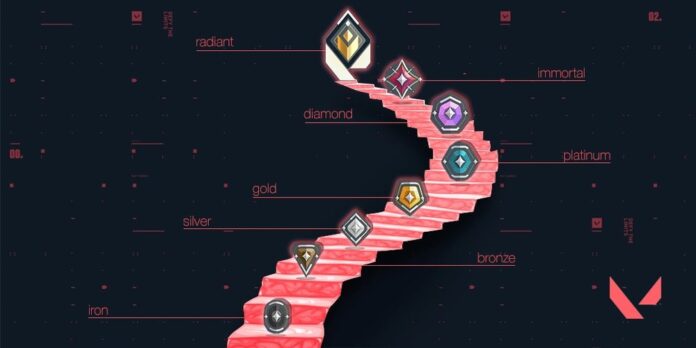 Valorant is currently one of the biggest competitive shooters in the world of video games, and millions of players tune into the title each day to refine their skills and get better at the game while competing against others in 5v5 games.

It goes without saying that a competitive game like this also requires a rock-solid ranking system that correctly grades its players based on their skill level. Riot Games’ ranking system for Valorant consists of several rank groups, where each rank group is further divided into three subgroups which the players must cross to proceed to the next skill level.

The rank groups consist of Iron, Bronze, Silver, Gold, Platinum, Diamond, Ascendant, Immortal, and Radiant. The Radiant is the highest attainable rank in the game and is the only rank that doesn’t include any sub-ranks.

It’s important to note that not all players can participate in ranked Valorant games. Players need to be at least level 20 in Valorant to unlock ranked mode in the shooter.

Are you curious to know how does your marksmanship skills fare against other Valorant players? We have you covered.

In this article, you’ll be able to see a detailed chart showing the rank distribution of Valorant players which you can use to get an estimate of how good you are at the game compared to an average player.

Here’s the rank distribution of Valorant as of December 2022, as revealed by Esports Tales:

You can see a tabular representation of the data below:

If you’re wondering what percentile of players you belong to, take a look at the table below:

Taking a glance at the data, we can see that the density of players in the ranks increases steadily from Iron to Gold. It then starts to fall gradually from Gold 3 and takes a dive from Diamond and above, with only the top 1% of players being able to secure Immortal 1 and above.