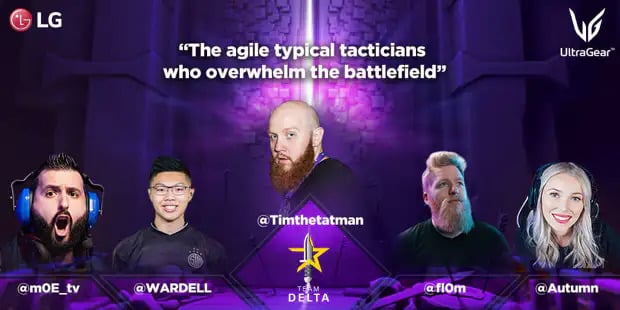 LG and Tempo Storm partnered up to organize the LG UltraGear Faceoff for Valorant featuring pros from various FPS titles including CSGO, Overwatch, Call of Duty, and Fortnite. The faceoff would decide which of the competitive FPS games could give players the most advantage when transitioning to Valorant.

There were four participating teams in the tournaments with the participants consisting of professional players and popular streamers. The tournament was streamed live on LG’s official Twitch and YouTube channels on October 3rd.

While all of the teams showed excellent performance throughout the tournament, there could only be one winner. In the end, it was Tim “TimTheTatman” Betar and his Team Delta who picked up the title of “Game changer” along with the prize money of $10,000.

After closing their first match 13-8 against Team Strikers on Bind, Delta smashed through the upper bracket finals against Team Survival with a scoreline of 13-6.

The grand finals weren’t as easy for Team Delta though. The rematch against Team Striker proved to be quite a test of skills for TimTheTatman and his team. Strikers managed to force overtime against Delta but couldn’t convert it into a win. The final scoreline showed 14-12 when Delta was crowned as the winners of the LG UltraGear Faceoff.