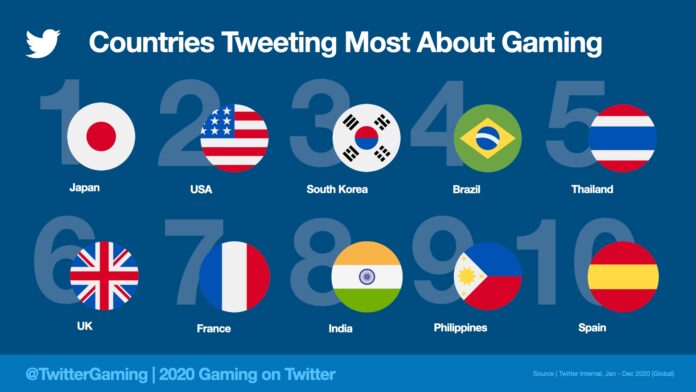 Twitter has established that 2020 was the most successful year for video games. The bird app’s yearly stats have revealed that India was one of the top eight countries that contributed to Gaming becoming a prominent topic on Twitter.

Video games had a statistically phenomenal year due to travel restrictions that locked people inside their homes. Consequently, video games appeared as one of the most discussed topics boasting 2 Billion Tweets throughout the year. The social media platform had never witnessed such huge numbers before. Compared to last year’s 75%, the gaming genre skyrocketed, gaining 45% traction in social media popularity. The stats saw a significant boost in unique authors throughout the year.

Video games were meant to dominate a year which was spent on sofas and inside bedrooms. However, India managed to become one of the countries to help gaming come to the fore. A herd of those 2 Billion tweets come from India, as the country ranks on number eight followed by Philippines.

Streamers, content creators, and PUBG professionals kept the fans on their toes, as fans tapped out those tweets. Prominent collaborations, award nominations, and international brands’ interest in Indian teams kept the scene thriving throughout the year.

Gaming was trending in India

The world realised the power of Indian esports when PUBG mobile was hit with a ban. Initially, it seemed like a petty issue, but this ban took Tencent’s profits down with 3%. The colossal player base of PUBG Mobile India took to Twitter to showcase the vitality of gaming in the country. Tanmay “ScoutOP” Singh’s collaboration with Herschel “Dr Disrespect” Beahm is a solid proof of the power of PUBG mobile. The major collaboration had everyone talking about the biggest stream of the year. The anticipation leading up to the stream flooded social media sites as both the streamers enjoyed a tremendous following. Total count of the stream hit 238K concurrent viewers, proving what transpires when two big names are in the play.

Naman ‘MortaL’ Sandeep Mathur’s nomination in esports awards alongside star streamers Alexandre ‘Gaules’ Borba, Ibai ‘Ibai’ Llanos, Felix ‘xQc’ Lengyel, Imane ‘Pokimane’ Anys, and many more was also a treat for Twitteratis. The streamer made and broke new streaming records, creating a colossal viewer base for himself. Team Vitality’s heroic entry into Indian esports was also a historic moment as they launched a team of content creators.

On the PC esports side, Valorant revived the PC gaming ecosystem in India. More streamers played Valorant and tournaments like Agni series, and ESPL enlivened the declining PC atmosphere. India’s viewer base finally had a new game to talk about in monotonous times of PUBG mobile.

Safe to say, Indian esports devotees are taking over. Twitter’s stats testify the dynamism of gaming in India, as the country beats the likes of Philippines and Spain, where esports budded long before. Japan perched on the number one spot, and Spain sat on the bottom. The USA, UK, Thailand, France, South Korea and Brazil also made an appearance in the top 10.