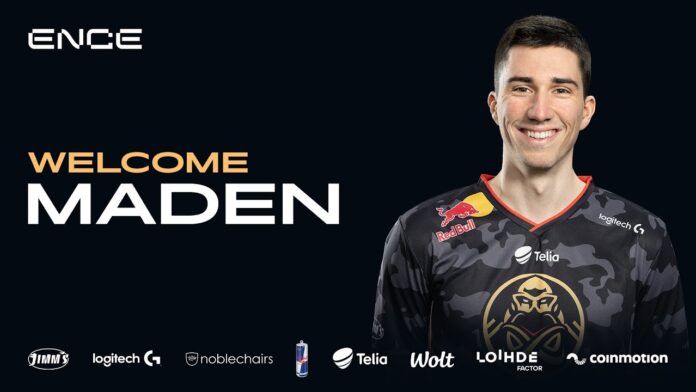 Finnish organsiation, ENCE, announced the signing of Professional CSGO Player Pavle “⁠Maden⁠” Bošković via twitter today. The Montegengrian had been on the bench ever since Chinese organisation Funplus Phoenix decided to end their CSGO operations back in November. He was part of the original GODSENT roster that FPX acquired.

Despite the team not qualifying for the Major or having any podium finishes, ‘Maden’ had performed well throughout and this has been taken note of by ENCE as they added him to finalize their CSGO roster.

ENCE sported a fully Finnish roster until 2020, which also consisted of the IEM Katowice Major runner ups – allu, xSeven, Sergei and Aerial. xSeven was acquired by HAVU Gaming and left the team as Elias “Jamppi” Olkkonen became part of the main roster. Middling results and motivation problems for the members saw them leave one by one, starting with Aerial, sergej and then sunNy. They signed ‘doto’ to be part of the main squad.

In 2021, ENCE went international, after ‘Jamppi’ decided to move to Valorant and was acquired by Team Liquid.  ENCE completed the signing of Danish IGL ‘Snappi’ and Israel rifler ‘Sphinx’ from c0ntact Gaming. ‘Dycha’ was also signed from Sprout to round out the roster, which meant ‘allu’ was the only remaining member from the Major run.

After ‘allu’ benched himself in the middle of 2021, ENCE signed polish AWPer ‘hades’ as ‘doto’ was the only Finn on the roster.

2021 was somewhat successful for ENCE as they were #7 in the world at one point. Despite having no RMR points from the previous year, they went into the final RMR event, IEM Fall, and made it all the way to the final to take home enough points to go to the Major. At the PGL Stockholm Major, ENCE qualified for the Legends stage with ease but couldn’t do anything once qualified. They went out with a 0-3 whimper and that was the end of the road. The trend continued at the end of the year for them as well and they sit at #17 for now.

Come 2022, ‘doto’ was benched and ‘Maden’ was signed. Maden had been on FPX’s bench and many teams had their eyes on him, for his explosive entry fragging. He had already stood in for the team once at IEM Winter 2021, in place of Snappi.

ENCE coach Eetu “⁠sAw⁠” Saha said “We are very excited to bring Maden into the team! We already had a brief encounter with him at IEM Winter and he left a good first impression, Maden is a social and easy-going guy who gets along well with the team. Also, he brings in a lot of firepower and aggression, which can help elevate our play for the upcoming season,”

“Rolewise, there will be some changes to make Maden comfortable and make the team function better.”