With the next CSGO Major – PGL Antwerp just around the corner, Valve shipped a new update for CSGO. New stickers for the upcoming Major have been released, for all the competing teams. Unlike the last major, where only players from the top 8 teams got player autographs, this time around, players from every team will get their signatures in the game from the start.

There were still questions on whether Valve would follow the same criteria as last time even after receiving a lot of flak for doing so, but today’s update answered that question, as alongside the team sticker capsules, there are capsules with the player autographs for all the competing players.

Like every year, Valve also released the Viewer Pass for PGL Antwerp, with 2 variants. The first variant does not give the player any souvenir tokens, while the 2nd one gives them 3 extra tokens, which can be used to claim souvenir packages from the match of their choice from the Major. Both Viewer passes let players participate in the pick ‘em challenges for the Major, and equip them with a PGL Antwerp Coin to be displayed on their CSGO profile.

There are a total of 24 teams competing at PGL Antwerp Major (full list here), so 3 capsules have been released for team stickers, 1 each for Legends, Challengers and Contenders. Alongside the team stickers, there are capsules containing player autographs from the players of the competing teams.

In typical Valve fashion, the CSGO Twitter account teased the release of stickers beforehand, before releasing the update for PGL Antwerp Major stickers and viewer pass.

Continuing the trolling, the account even changed their name and the Profile picture to FaZe Clan player Robin ‘ropz’ Kool’s, as ropz continuously interacts with the account, especially for finding new ways to throw smokes using the developer console. 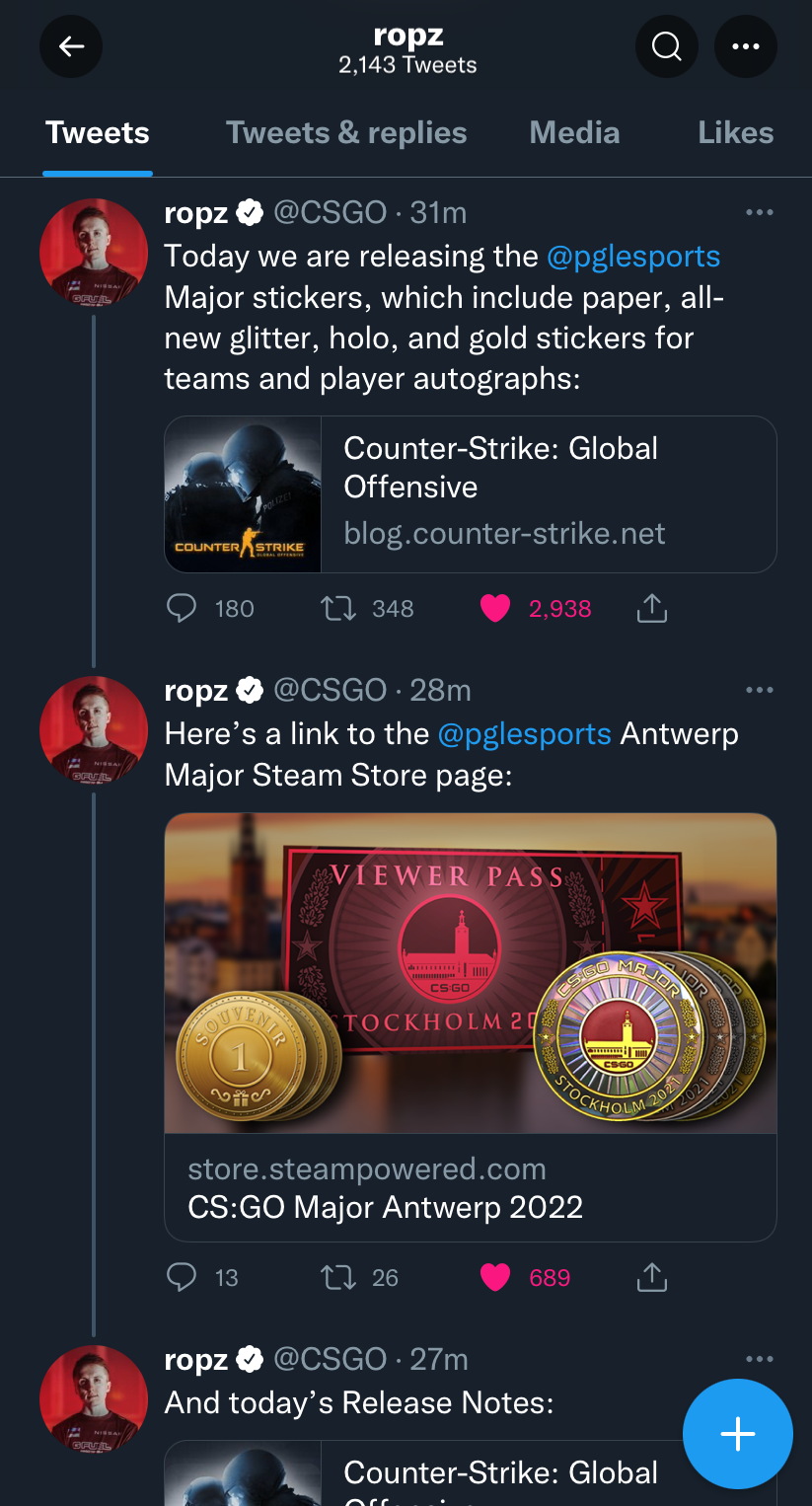 There are 4 variants of each sticker this time around, with an all new ‘glitter’ type of sticker being added to the game. The regular Paper, Holo and Gold stickers are still in the capsules for both the teams and players. There are no Foil type stickers, as they have been replaced by the glitter type.

Multiple teams will be getting stickers for the first time, such as Mongolian side IHC, Turkish Superteam Eternal Fire, Kosovo’s Bad News Eagles and 9z Team from South America.

Cloud9 will be returning to a CSGO Major for the first time since IEM Katowice 2019. They acquired the former Gambit roster which had been competing under the ‘Players’ banner following sanctions from PGL, ESL and BLAST.

The Legends, Challengers and Contenders Capsules can be brought in-game in CSGO, as well as the viewer pass, and the souvenir tokens. The full release notes can be found here.

The $1 million tournament starts from 9th May, with the New Challengers stage kicking off first to determine 8 teams that will advance to the next stage. The initial matchups are as follows, with the G2 vs Team Liquid game turning a lot of heads.

Around the World – Weekly Valorant Esports...

How to fix Persistence Read Complete Error in Apex Legends?

Valorant: All you need to know about the Neptune skin bundle