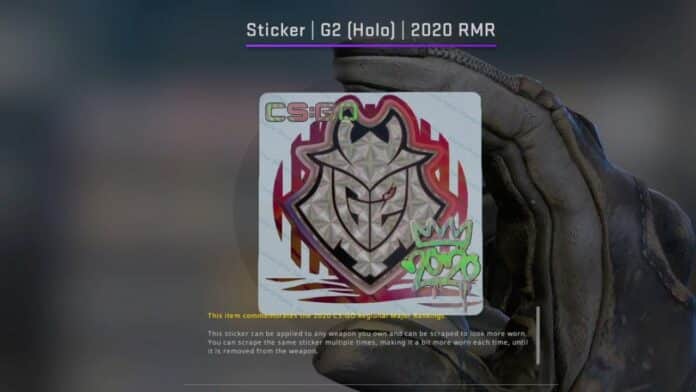 Valve has pushed a new CSGO update this morning which brings RMR Stickers (Regional Major Ranking) for 2020 circuit. This stickers are for the teams who have had qualified to ESL One Rio Major on the based of points they have accumulated in the qualifying tournaments.

Furthermore, the leaderboard RMR standings for 2021 will now be reset and the teams which held Legend status in the previous renditions of the Major will head over to the new year rankings circuit with 600 points.

Valve has also put light to the spectators exploitation with this update, where some of the coaches involved, were banned for life.

The organizational structure of a team is also affected by this new regulation by Valve where the managers will no longer be allowed to be present with the active roster during the game. A rule, which is been highly criticized by the CSGO community on social networks.

The rules not only bars managers from being present, but the support staff of the team will also be disallowed to communicate with the active players for any reason whatsoever.

Another segment of the update covers economical changes to the game. A minor, yet significant change has been brought to the Wingman & Competitive ranked games where $1000 will be awarded to all the team members with a player deficit, for three consecutive rounds.

Further, timeouts will be automatically applied for if a player disconnects from either of the teams. The game will resume instantly as the player joins in, even if the timeout duration remains.

There has also been changes to Elysion map, which can be found below in the patch notes for the latest update.

[2020 RMR Stickers]
– Team Stickers featuring the best-performing regional teams from the 2020 Regional Major Ranking events are now available for purchase. 50% of the proceeds go to the teams who participated in the 2020 RMR.

[GAMEPLAY]
– In Competitive and Wingman, if your team has fewer players than the opposing team for 3 or more consecutive rounds in the half, each of your team members will receive a $1000 ‘Shorthanded Loser Income’ following a round loss. This does not apply in cases where a player was kicked.
– In Competitive and Wingman, each team has one 2 minute technical timeout that will be automatically initiated the first time a teammate disconnects. The timeout will end early if the teammate abandons or reconnects to the match.
– Pinging now displays the name of the pinged location. (Thanks, VasaLavTV)

[MAPS]
Elysion:
-Outside
-Fixed a boost spot near the entrance to A site.
-Fixed a pixel walk on the door hinges (both doors).
-Improved the clipping of the roof.
-Grenades now bounce more predictably off the wall.

-A site
-Improved the clipping on the A sign.
-Fixed a pixel walk on top of the wall.
-Fixed a gap in the center wall on site.
-Grenades now bounce more predictably off the A sign, Elysion sign, art on the wall, wall in connector, the wall on site and the poles connecting to the roof.

-Middle
-Fixed a boost spot where players were able to jump on top of the waterfalls.
-Fixed a pixel walk on the lower levels of middle.
-Fixed a pixel walk on the light fixtures (not sure how you would get up their but you cannot trust anyone).
-Grenades now bounce of more predictable of the grey poles inserted in the wall, the wall with the waterfalls and the wall near T spawn.

-T spawn
-Fixed a pixel walk on the clock (clock has been made non solid).
-It is no longer possible to jump on top of the light above the desk.