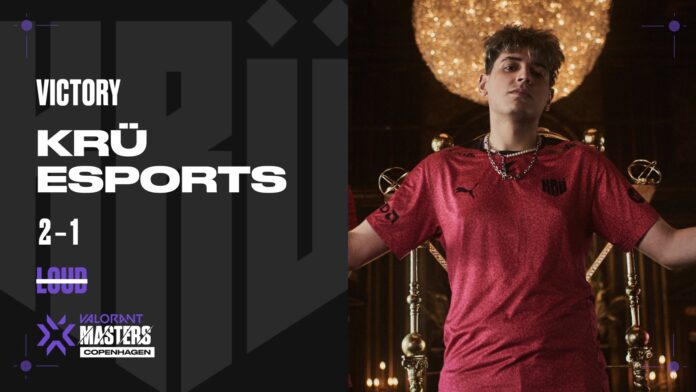 The first day of Valorant Champions Tour Masters Copenhagen started with a bang. With opening games played for Groups A and B, We got the first taste of what we can expect from the tournament.

The event’s first game delivered beyond expectations with DRX, The Korean Royalty taking on the Northeption, the youngins who beat ZETA to make it to Copenhagen, and it was all we expected.

The game started on Northeption’s Ascent, where DRX on attack fumbled a bit but eventually found gaps in Northeption’s defense and, despite being 2-4 down, managed to close the half 8-4.

On defense, DRX started strong with the pistols, but again Northeption managed to win four rounds in a row to close in on DRX. But the experienced DRX managed to stop the bleeding before it was too late and close out the first map 13-8.

The second map was Bind, DRX’s pick, and they ensured every team on the event understood what they were capable of. With the accurate flashes and coordinated attacks, DRX managed to completely overwhelm Northeption’s defense and win the first half 11-1.

The second half wasn’t any different, and DRX managed to close out the easy game 13-1, winning their opening game 2-0 and handing Northeption their first defeat in an International event.

Despite the dominating scoreline, Northeption’s performance was on par with DRX, and they didn’t seem any less prepared than DRX. Northeption would now face the loser of the XERXIA/FPX game in an elimination match.

The second match was a South American Brawl, where LOUD played against KRU esports. KRU came into the tournament by beating NiP 3-0 in the VCT SA LCQ and looked good, while LOUD has been undefeated and hadn’t dropped a map this split.

Starting on LOUD’s fracture, KRU started strong but failed to win consistent rounds and lost the half 4-8. LOUD now on defense, seemed to struggle a bit, and KRU has begun to come back, but the eight rounds in the first half seemed beneficial to LOUD, and they managed to win the first map 13-10.

On KRU esports Haven, KRU repeatedly found gaps in LOUDs’ defense and won the half 8-4. The sides changed, but the results remained the same, and KRU on Defense managed to hold off LOUD’s attack and win the game 13-9.

With the scores tied 1-1, KRU and LOUD hopped in Icebox for the decider. With LOUD on

Now KRU on defense completely shut down sites for LOUD and, despite a shaky start till the score 7-10, managed to win six rounds in a row and win the final map 13-10 to win the series 2-1.

With this, KRU has again managed to upset a team in the group stage and would now head to Winner’s bracket, while LOUD now needs to win the next two games to qualify for the event.

The final game of day 1 had the Classic EU NA rivalry with Guild from EU coming in the event as somewhat of a dark horse while the defending champions Optic Gaming would want to change the record of 0-7 against EU teams in the game.

The game started with Guild’s pick of Icebox. The Guild, spearheaded by Koldamenta’s sneaky plays, won seven rounds on attack and outplayed Optic Gaming in a row. Optic won the eighth round on Crashies’s heroics and closed the bleeding ending the half 4-8.

Now on Defense, Guild Esports struggled to hold off Optic, and the FNS calls were too much for them to Handle. And despite winning the first three rounds and getting to 11 first, Guild lost 7 out of the next eight rounds to bring the game close. Guild managed to hold off Optic in the last

rounds, denying the comeback and winning the first map 13-11.

On Optic Gamings’s Split, Guild once again managed to win seven rounds in a row on defense and started strong, and Optic replied strong and won the next four rounds to close out the half 8-4 in Guild’s favor.

Optic on defense replicated Guild and managed to hold off Guild’s attack to reach map point first. In the last round, a quick B finish caught Optic Off-guard, and Guild drew the map 12-12, forcing overtime.

Guild quickly dismissed Optic’s advances in the first overtime, winning the first OT round. They managed to kill three players on attack, but FNS stood his ground and won the round to force another OT.

The teams again exchanged attacking rounds, forcing the third OT, Optic being a man up, decided to attack the B site. Still, Russ managed to hold off the attack and single-handedly killed three players winning the defense round of the third OT.

Guild lost the opening duels in the round but recovered by pulling off a 3v5 round to win the game 16-14 and the series 2-0.

With this, Guild would now face KRU esports for a chance to qualify for the event, while the Masters Reykjavik finalists Optic Gaming and LOUD would face each other in an elimination match the day after.

The second day for VCT Masters Copenhagen would give us the first team to qualify for the playoffs while the last opening match between XERXIA esports and FPX would be played starting 15:00 GMT today.

You can read about the format and schedule for the tournament, venue, ticketing, and the teams participating and where to watch the stream here.