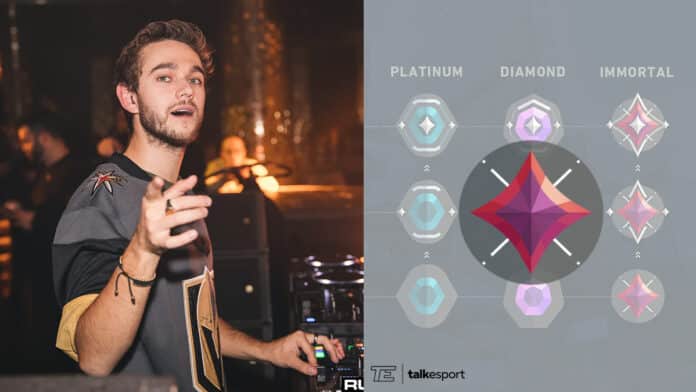 Renowned dance artist Anton ‘Zedd’ Zaslavski has reached the prestigious rank of Immortal in Riot Games’ tactical shooter Valorant. The star shared the news with his fans through his Twitter handle today with an attached video showcasing his recent games, all of which resulted in wins.

The Tweet was swift to gain traction among his fan base, even garnering the attention of 100 Thieves‘ Nadeshot who congratulated Zedd on his achievement.

The Immortal rank in Valorant lies just under the rank of Radiant, which is the highest rank achievable in the title.

It goes without saying that reaching Immortal is an incredibly tough feat to accomplish for the majority of the Valorant player base, and only a small percentage of players have what it takes to get there. It appears like the beloved DJ is one of those players.

Zedd is currently ranked 24th in the global DJ rankings. It ranks DJs across the world based on their overall income, social media reach, and fan votes. The Grammy winner also has a number of other prominent nominations and awards under his belt.

Should Zedd continue to continue his Valorant grind, there’s also a possibility for the star to reach Radiant, which will certainly be a remarkable achievement for the 31-year-old.