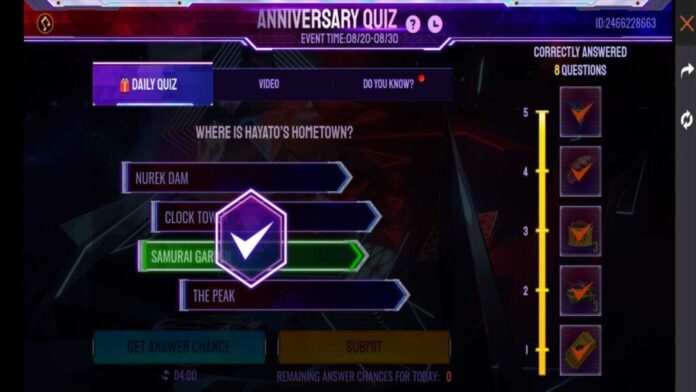 As Free Fire enjoys its fourth anniversary, the developers have dropped a series of events for the players where they win in-game items and skins. These events will run till the end of the first week of September, so make sure to grab them before. Besides rewards upon completion of tasks, the game will also offer daily unique login rewards.

The Free Fire 4th Anniversary Quiz event began on the 20th that brings a simple questionnaire for the players to answer. Players of all ranks can compete here to get rewards in exchange and the question looks are somewhat like this:

Question: Where is Hayato’s Hometown?

The correct answer to this question is Samurai Garden.

As per the lore Free Fire story of Hayato, he was a child hailing from an incredible Samurai family. He was the lone offspring of the family so Hayato needs to carry on the family custom and glory going forward.