The events in India certainly lack the level where the media broadcasters invest their time in their Documentary. Instead, the major events where people expect to get experience of the sport and general idea about the business modules from the event, mostly turn out to be a blunder or a mishap.

We can’t forget the nightmares Indian Gaming Carnival left us with couple of years ago. Nor we can forget how some famous multi-national brands award winners of an event with second hand and malfunctioned products. We witnessed these two and a dozens of more such events live, understood the pain and disappointment from the gamer’s perspective and felt a bit more devastated. In India, ‘gaming’ or I may dig into specifics ‘esports’ is not another famous term where people recognizes it the very moment when you throw the word to them. Although, having dozens of massive successful events, a whole list of credible production and media houses and a lot more of business oriented independent esports organization, we still fail to get noticed upfront the masses.

Video Game Fest which called itself, India’s Biggest Gaming Galore was organized in Bangalore on 11th October this year. The event was this year’s one of the most hyped festivals as for the scale of the event, the event also saw a massive appreciation from the sponsors and the companies who were a part of the organizing team.

I won’t even care about prizes, if Games the Shop does a fighting game tournament, I’ll be there like a fly to shit.
– Raghavendran Ravi

Here is it how it goes, after the event concluded successfully from organizer’s perspective. People started to complain about how their experiences at the event which construed by a hell lot of technicality and conductive issues:

Product Marketing Strategies where Gamers are the victims

Why this behavior and ill-treatment? Because we are gamers? We waste our time playing ‘computer games’?

This strategy works every effing time, doesn’t it? Greed the gamers of big prizes, get huge number of professional gamers and spectators, show the numbers to sponsors and boom, yet another successful ‘video game’ fest.

Marketing a product is a no crime, but certainly leveraging upon gamers and treating them like dirt, is practically dirty. These practitioners fail to understand that if we being gamers, start to boy-cot events in masses, there would no really no one to experience these product launches.

Was it really a strong to file police complaint against the organizers?

Well, here’s the catch. You and me both got it wrong. Actually, the complaint has been filed by the organizers against winner of Forza sport and Mortal Kombat X tournament for asking his prizes. 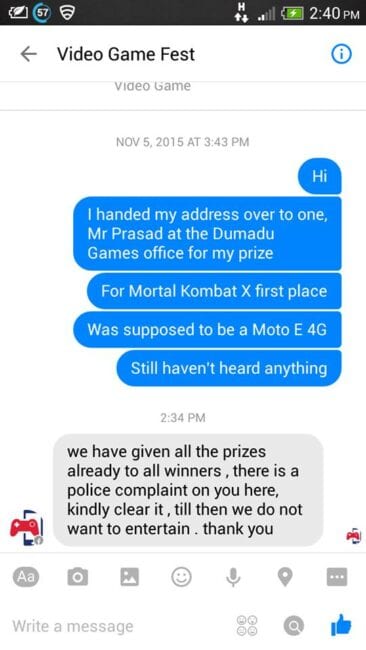 What interesting in this whole story is, the guy, Raghavendran Ravi got a police complaint filed against his name supposedly because of his feedback on the event and his unanswered queries about his prize money. Or else, this is another strategy by the organizers to threaten a ‘video gamer’ because he is a wasted kid and would back-off?!? I mean where in the world is this a crime? Even though he might have shared some unpleasant experience of his, is it enough to have his name filed into criminal records?

From the words of the attendees

Everything else was pretty well organized, but console gaming was a disaster. They didn’t know how to organize a fighting game on console.
–Shiva (Participant)

Wasn’t organized properly at all. The console gamers had no chairs to sit on for most part of their event. Nothing was on schedule. There was even a small fire when the wires F*cked up. They were blasting music when the teams were playing their semis and finals even though we requested not to. There was no official prize ceremony for the counter strike winners. All this can easily be fixed the next time around imo. But threatening a participant with a police complaint and not giving him a prize that he won fair and square just because he bashed the event in a community group is unacceptable.
– Sid Joshi (Team Manager, NeckBreak)

The first day was a total disaster.
– (Anonymous Participant)

The event was spontaneous, but poorly organized.
– Akshat Mehta (Spectator)

Raghavendran still have not got his prize yet, but all he has got is a police complaint registered against him, which also technically means that this will remain sticked to his career for eternity. Being a student and planning for a masters abroad, a police complaint registered under your name isn’t a healthy sign at all. But if, ONLY IF, this was a tactic to threaten him so he steps back then surely, Videogame Fest organizers should definitely need to answer some serious questions.

We have reached out to the organizers for their word, and will keep following up to this story as it grows. For traction, we also have mentioned that this would work as defamation material against the organizers and if they don’t resolve this issue as soon as possible, they’ll have to face the consequences.