VALORANT Patch 1.05 has went live on August 4th and it introduces a plethora of new stuff to the game for players to enjoy. The new features include a new agent, a Battle Pass, a new game mode and some nerfs to Raze’s abilities to balance her out. A reworked competitive system has also been introduced to the game and from now on, players will have an “Act Rank” at the end of every Act in the game.

This German agent was already announced a couple of days prior to the actual launch of the update will detailed descriptions of her skillset. Riot also released an official trailer for this new agent who primarily relies on her turrets and robots to take control of the battlefield.

For a long time, players across all ranks have been complaining that Raze required fixes to her abilities, especially her ultimate, which is a one-hit kill (or multiple kills) if aimed correctly. This patch focuses on giving players enough time to react to her ultimate’s audio cue while simultaneously reducing the damage output of her “Blast Pack” by a margin.

Here are the changes to Raze in the latest patch as mentioned in the official changelogs.

Riot has introduced a new concept of “Act Ranks” in their revamped competitive system for their tactical shooter. Players have to play three more games to see their initial ranks of the Act which will likely be about two ranks under their previous rank in Act I as mentioned by Riot in their website. However, Riot has claimed that performance will have a larger impact in the early games of the Act, so players can hope to gain/lose ranks faster depending on how they perform in their initial matchmaking games.

Another interesting adjustment to the competitive system, apart from the ones previously mentioned by Riot, is that players are much more likely to be placed with and against players of similarly sized premade groups. For instance, a solo queue player will more likely be placed in a game filled with players in solo queue.

A 10-player free-for-all Deathmatch mode was also introduced into the game through patch 1.05. The first player to reach 30 kills is crowned the winner in this game mode which lasts for 6 minutes per game. Players will load in the map as a random agent they own, however, no abilities can be used in this game mode. Weapons can be bought at will, and heavy armor is given automatically to all the players.

Apart from these major changes, patch 1.05 also brings a wide array of quality of life changes to the game along with several bug fixes. The complete details of the patch can be read in VALORANT’s official page here. 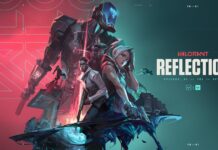