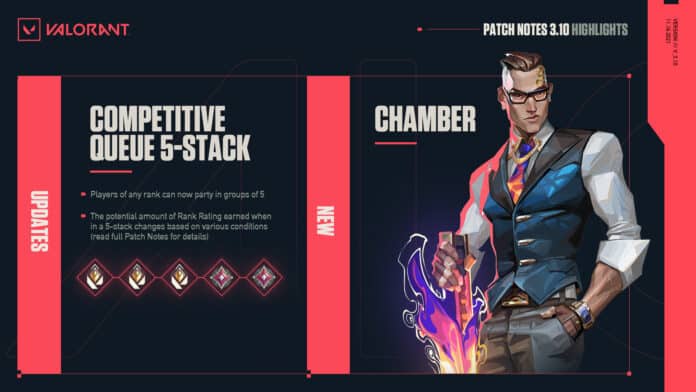 Valorant patch 3.10 is all set to be deployed today in the live servers, and it will bring with it the new sentinel agent Chamber alongside a bunch of other content to the competitive shooter. Furthermore, the upcoming patch will also change the current competitive party queue restrictions and will reduce the rank rating points awarded or reduce in 5-stacks.

If you wish to know more about Valorant patch 3.10, check out the detailed patch notes here.

Since the full patch notes were disclosed by Riot Games, a lot of players were left confused about how the competitive changes will affect their ranked games. In case you’re wondering what the new update means for your ranked games, look no further.

For starters, all the restrictions on 5-stacks in Valorant have been removed. For instance, Immortal players will now be able to play with Iron and Bronze players if they’re queuing in a 5-stack.

“Our data has shown that the most common reason that players smurf, is because they want to play with their friends outside the bounds of our current ranked restrictions,” the devs stated in a  blog post. “Removing these boundaries for 5-stacks specifically, means that you can play with your friends regardless of the restrictions that exist for smaller party sizes in Competitive Queue.“

However, the rank rating gains/losses from 5-stack games will be reduced depending on the skill disparity between the players.

If one or more members in any party are Diamond 3 or above, at minimum, a 50% RR reduction will be applied to the party. This amount can increase to 90% as the disparity in skill increases.

If one or more members of a group are Radiant, a minimum of  75% RR reduction will be applied, which can increase to a max of 90% depending on skill disparity.

5-stack teams will also only be matched against other 5-stacks, so queue times may vary significantly along the ranking spectrum.