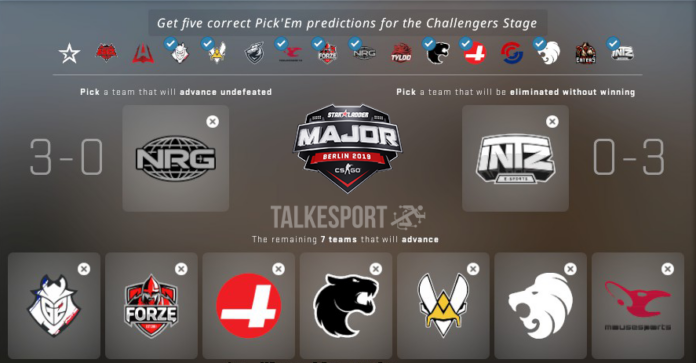 It is that time of the season where the who’s who of the Counter Strike circuit battle it out in the quest of being crowned the best team in the world. But, the teams are not the only ones set for battle.

Enthusiastic users all over the world vie for bragging rights and the aim of being the cream of the crop when it comes to predicting how the Major is going to pan out and prove their knowhow of the overall scene.

The Starladder Berlin Major 2019 viewer pass enables the buyers to do just that. The first phase of the Predictions is the Challenger Pick’Em. Herein, the users have to pick one team that will go undefeated in the New Challengers Stage or the Main Qualifiers, along with one team that will not be able to register a single win in the said phase.

Apart from the two selections, the enthusiasts also have to choose the seven teams apart from the 3-0 team that will make it to the next round. There are many versions of the prediction available online via Twitter accounts of CSGO professionals and personalities to aid the decision of fellow gamers. This is an attempt to do the same; to provide some context or clarity, a potential method to the madness that is the Pick’Em.

You could even chuck CR4ZY into the mix of teams that have the potential to go 3-0 in the Challengers Stage and be able to justify it. But, taking the rookie factor into account, we have opted not to include them in the list of favourites to go undefeated in the said phase.

The chosen ones all have Major experience within their team. Vitality are one of the best teams in the world right now and one of the two teams to have undefeated Astralis recently in a Best of 3. G2 have proven that they are a stable team and have KennyS back on song, which is a huge plus for the French stack going into the Challengers Stage.

mousesports do not have a glorious history at the Major. But, the team finally seems to be coming together nicely and karrigan’s leadership and experience will go a long way in helping their cause. Not to forget that the roster is one of the most stacked lineups in terms of raw skill and individual star power.

But, we have chosen to go with NRG. Despite their questionable rebranding (new logo), NRG were an absolute unit. But, with the addition of stanislaw, the stack has had an injection fresh ideas while the Canadian is a bit of an improvement in terms of individual firepower compared to daps, who had done an incredible job of bringing the lineup to where they are right now.

It is worth noting that it was under the leadership of stanislaw that Complexity managed a shock run to the top 8 at the FACEIT Major 2018.

NRG start their campaign against DreamEaters, a CIS team that came out of nowhere to qualify for the Play-Ins, crushing Spirit’s hopes of making it to another Major. But, the comparative gulf inexperience is likely to take a toll on DreamEaters and NRG should run out comfortable winners. The North American stack looks powerful on paper, is likely to pack a punch at the Major and is our pick to go undefeated in the Challengers Stage.

This may be a slightly controversial pick. For one, DreamEaters and Syman do not have any experience at the Major, like INTZ and are hence, favoured to go the entire phase without a win. Grayhound are also an outside chance, merely for the reason that this is erkaSt’s last event with the organization. While that could provide motivation to perform without pressure, on the flip side, it could also be the cause of underperformance in some cases.

INTZ for the same reason and more, are our pick for the 0-3 bracket. kNgV- has all but secured his move to mibr, with reports stating that the primary AWPer is set to fill the void created by coldzera’s departure. Although, no one can doubt the professionalism of the lineup and kNgV-, the former Immortals star could underperform with his head in a different place.

kNgV- is arguably, the most impactful player in INTZ’s roster and him not playing to his full potential could have dire consequences for the Brazilian stack. INTZ have already been relegated to the MDL, which could have an adverse effect on the team’s morale going into the Major.

It is worth looking at the fact that INTZ made it to Major with an incredibly shallow map pool, playing just four maps out of the seven in the current competitive circuit. The other teams are surely to pay heed to this information during their preparation phase. Also, DreamEaters are likely everyone’s pick to go 0-3. But, the CIS team beat INTZ at the Minor Play-In earlier, which is something that also affects our prediction.

There is hardly any explanation needed for the rest of the teams. North might be the only other team that needs to be explained. But, valde has done a credible job with the Danish stack so far, despite being new to the IGL role and their recent results give us hope that North will be able to reach the Main Stage.

HellRaisers have been poor of late, with the roster moves not really panning out so far for them. There seems to be a lack of cohesion within the team and maybe, it will take more time before they are able to gel and perform better as a squad.

AVANGAR have brought in AdreN to add some experience to the lineup, which along with their primary AWPer and arguably their best player, Jame, makes them a strong contender to qualify for the Main Stage. But, we believe forZe have that X-Factor and team chemistry that might see them prevail over AVANGAR, who haven’t played much since the addition of AdreN.

Call it a gut feeling, a hunch or just something off the back of watching forZe play, but we expect the CIS stack to surprise other teams at Berlin.