Summary Report: What is happening to the recently released GodLike Esports Valorant roster? 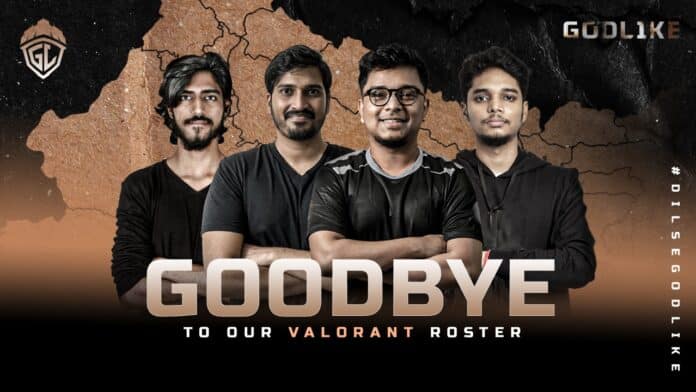 GodLike Esports have officially announced that they have parted ways with their Valorant roster, thereby withdrawing their own participation from The Esports Club’s Gauntlet Season 2 and other running competitions.

The biggest news related to the release of the GodLike Valorant roster is Debanjan ‘DeathMaker’ Das’s transfer to Velocity Gaming. The mercurial duelist has reportedly been acquired for what is the largest transfer fee in the history of FPS Esports in India. DeathMaker has only played under GodLike Esports so far in his Valorant career since announcing his full-time switch from csgo. It will be intriguing to see how he performs within the VLT setup, wherein he reunites with friend and former teammate Sagnik ‘hellffr’ Roy. DeathMaker has played under Anuj ‘Amaterasu’ Sharma before at Entity and with Tejas ‘rite2ace’ Sawant under the Signify banner.

Coming to the only played retained by GodLike, Vishal ‘haiVaan’ Sharma cleared the air surrounding his Valorant future. While he has been retained as a content creator for the foreseeable future by GodLike, haiVaan has not bid adieu to competitive Valorant and will return if and when a worthy opportunity presents itself.

GodLike’s latest recruit Ayan ‘AyanQ’ Bhattacharya is reportedly going back home to former team Reckoning Esports, who are undergoing a major roster shuffle right now. If the reports are indeed true, expect another old face to re-emerge at RGE.

Shane ‘WhiteHorse’ Kariwow has reportedly been in demand as well, with a couple of top teams courting him and possibly even trying him out. However, WhiteHorse is likely to take a short break from competing in Valorant to spend some more time with family before considering his next step.

Nikhil ‘Flexx’ Govind is reportedly taking a break to focus on his studies and will be a big miss for the Valorant scene. Expect him to be in demand as well once he announces his return to competitive Valorant.

The likes of Sabyasachi ‘antidote’ Bose and Tejas ‘Rexy’ Kotian seem to have already found their home, with the duo set to be part of the Enigma 2.0 project, by the looks of it.

As far as Enigma is concerned, it looks like the trio of Saharyar ‘BadMan’ Shaikh, Sameer ‘godvexy’ Sharma and Rishabh ‘ezzyyy’ Gupta have parted ways with the organization. The trio is allegedly going to stick together and form a new team, with no information yet as to whether they have completed their stack or found a new organization to call home.

The Enigma 2.0 project will thus, probably see antidote take over the reins of in-game calling from BadMan, with Rexy being a direct replacement for godvexy. Akram ‘rawfiul’ Virani will mostly continue as the primary duelist along with Shakir ‘hikka’ Razak. It will be interesting to see if the Sri Lankan star returns to his duelist roots or continues to play the flex role in Enigma. There is no information regarding who the replacement for ezzyyy is going to be and it will be interesting to see who joins this exciting new Enigma 2.0 project.