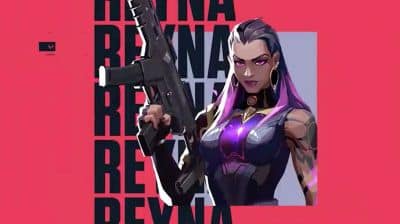 After the huge amount of hype surrounding the upcoming new agent in VALORANT, Riot has finally gone ahead and revealed an official trailer for the hero which is expected to hit VALORANT on its official release on June 2nd. Previously, Riot was seen teasing bits and pieces of the new agent through their blog and a tweet.

While no clear indication was made right then, today Riot has decided to make things more official, with the gameplay trailer for the new agent being officially released through another tweet.

The video attached with the tweet shows the new agent Reyna showcasing her skills in the game. Although nothing can be conclusively said about her ability effects, the Mexican agent seems to have an ability that allows her to heal herself while another ability seems to allow her to throw an orb into the air to provide her with a tactical advantage. The video also shows the agent being able to withdraw power from the enemies she kills, which is certainly unique.

What’s further interesting about her is her ultimate, which is called Empress, requires only six points to charge fully. However, no information is revealed about the ultimate effect as of yet.

The trailer also showcases the new map ‘Ascent’ which was announced by Riot to come out with the game’s release. Although, the details of the map from the video isn’t nearly sufficient for us to able to draw the structure of the map.

Besides the new agent and the new map, Riot had also promised the addition of new servers to VALORANT on release. Some more fixes like FPS drop issues, ping problems and performance issues in general are also set to be fixed by Riot in the upcoming launch