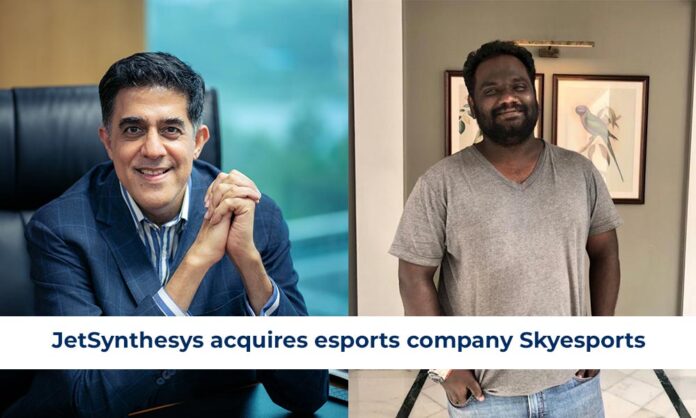 JetSynthesys, a technology company with a strong play in gaming and esports, has acquired Chennai-based Skyesports, one of India’s largest esports organizations with a grassroots play.

Titled Jet Skyesports Gaming Pvt. Ltd., the new entity has been created with a vision to build esports at the grassroots level in India ahead of the Asian Games 2022, which will include esports as a medal event for the first time in the history of all such tournaments.

This acquisition further strengthens Skyesports’ pan-India proliferation and also sets the stage for its expansion from India to South Asia, helping the brand create more IPs and strengthen its team.

In the last year, Skyesports has created significant buzz in the esports market with various tournament IPs such as Skyesports League, Skyesports Grand Slam, Skyesports Championship, and more. Known for developing cutting-edge and popular mobile games with high fidelity and network play, in-house, this is JetSynthesys’ second major investment in esports; the Pune-headquartered company is the co-founder of Nodwin Gaming.

Skyesports, on the other hand, has expanded significantly from its core in South India to expand its base within the country. It has the most number of tournament IPs in India with a combined total viewership of over 100 million across all platforms (Facebook, YouTube, and Loco).

The company introduced the Skyesports League this year which featured the first league format in Indian esports history and also became the most-watched VALORANT tournament in the country to date. It amassed total viewership of over 10 million, becoming the first esports event in India for a PC game to achieve such a feat.

Speaking about the acquisition, Rajan Navani, Vice Chairman and Managing Director, JetSynthesys said, “We are happy to have Shiva and his team as part of the JetSynthesys family. Next year is a year of reckoning for esports globally as it becomes a medal event at the Asian Games, the first in the history of any such prestigious global tournament. Indian gaming has immense potential, and the talent which resides in the non-metros often goes unnoticed. Our vision, therefore, is to build esports at the grassroots level and empower individuals who have a passion for gaming to make a career of it. Through Jet Skyesports, we will grow the esports ecosystem to cover the deepest parts of India, to make it more mainstream, and to also mold international-level talent from here to represent the country at global events as powerful contenders.”

“This is a well-timed partnership and we are very happy that JetSynthesys and Skyesports’ vision are on the same track. The esports and gaming market is growing at a rapid pace in the country and the investment comes as a strategic move and at the right time to explore bigger opportunities,” said Shiva Nandy, the CEO and founder of Skyesports. “We will work together to create many IPs for the gaming and esports enthusiasts in the country. Our core focus will still be on the grassroots level and on regional content and we will expand exponentially, added Gnana Shekar, CMO of Skyesports.”

With offices in Japan, UK, EU, US and India, JetSynthesys boasts of the best-in-class technical and creative talent, striving to create and connect digital ecosystems globally.