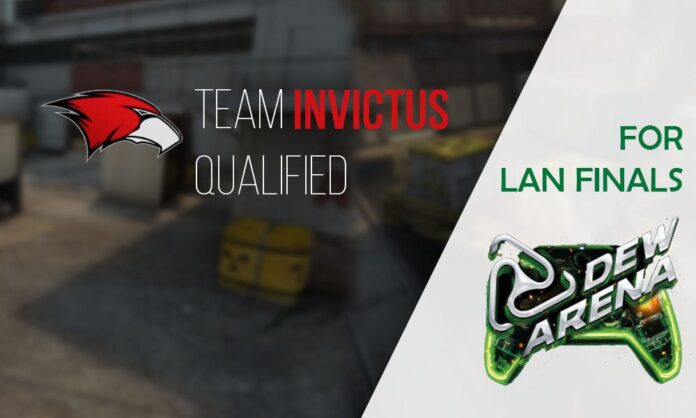 Team Invictus wins DewArena Online Qualifier #1 by beating Team Brutality 2-0 in a best-of-three final series. They beat Brutality 16-14 on de_train and 16-13 on cache making their way to the LAN event which is scheduled to be in September this year.

Brutality who beat MxB Gaming in the semi-finals performed indistinguishable versus Team Invictus who beat SemperX in the second leg of semis. Invictus, on the other hand, were stronger comparatively after they recently formed a new team with the likes of Excali and Ace.

The first map, Train started with Team Invictus on the CT side taking the first pistol round in a very clean manner having 4 of their players alive while retaking the site. Coming stronger on the second round, Brutality were able to surprise Invictus by forcing up the buy even though on the weaker economy and making their way to clinching 3 more rounds in their favor with astarrrr’s 1v3 clutch in the very first rifle round, forcing Invictus to go full eco in the sixth round. Team Invictus, however, taking on the next rifle round as dnm goes for the triple spray down in the inner bombsite followed by kills Ribbiz which led them winning the round. Only to get a respond strongly by V3nom and co., as astarrrr and Juventa pick multiple kills sailing their team to get another point on the board. Invictus were forced to eco’s as the scoreline strengthen to 7-2 in favor of Team Brutality. RibbiZ though, showing his capability in the outer bombsite as he takes down 3 man on rifles with his 5-seven on point and reducing the round to a 1v1 slightly favoring his team the last man alive, Juventa was already on 18 health points. Denying the clutch to RibbiZ, Juventa successfully clutched the round making the map scores 8-3. The following round with both the teams on full utilities was favorably traded by the Brutals with 3 of them alive, reducing the ct’s to a very weak economy. As the game progressed Team Brutality were strongly sprinting towards a victory by taking 11 rounds on board in the first half of the first map.

The second half, rather viciously dominated by Invictus as they were the pilot in the very first round with Marzil’s impressive and effective triple-kill, they were able to win the second pistol and a couple of following rounds making the scoreline look less favorable, 7-11 in favor on Brutality. With the quality lurker as Excali, Invictus were able to strictly restrict Brutality from having a breathing space as they quickly jumped up to 10th rounds with Brutality not being able to have a single round until then in the second half of the game. Tactical timeout came in as Invictus successfully were able to diminish the gap and balancing the scoreline to an 11-11. Marzil though, clutching a clean 1v2 in the rifle round forcing the opponents to limited eco rounds. As the game progressed, Brutality managed to get back a couple of rounds making the first map impartially stuck at 14-14 once again. As entering into the 29th and 30th round, Brutality were pretty much broken in the economy and were denied any presence by Ace & co., Excali, however, elevated much with his run as he finally leads Team Invictus to a victory in the opener map 16-14 with 26 frags on for himself. Cache, the very favorite map for the grand finals began looked like a pretty one-sided affair from the very beginning as Invictus won the pistol and the following anti- eco’s in a regular fashion ticking the scoreboard to a 3-0. The rifle round, however, went in favor of the Brutals as V3nom, Juventa, foXy and astaRRRRR each shared kills; only to deny them any further control of the map, Team Invictus quickly won the second rifle forcing Brutality to force up in the following round and taking the score further to 7-1. Team Invictus dominated the scoreboard and restricted Team Brutality to two rounds going into the 13th round. Team Invictus almost replicated the same what Brutality did to them in the first map as they close the opening half in a very dominant fashion 12-3.

The second half which initially, had a very little engross was taken over in a leap of faith by Astar, who took the responsibility and started to comfortably assist in winning rounds after slicing RibbiZ in the pistols. The game progressed unexpectedly in favor of Brutality as they started winning rounds slowly and were able to equalize the score at 13-13 with Astar stepping up for his team. Not to drag this further Excali responded back with a double and contested on the next two rounds to close the map at 16-13.