As Activision readies itself to rollout the Season 2 update worldwide, the company has started dropping teasers and hints about the new additions coming to the game with the upcoming update.

A new teaser was posted by the official COD: Mobile Twitter handle which featured a blueprint of the new upcoming Assualt Rifle. The post asked players to guess the name of the rifle based on the blueprint teaser.

Fans quickly guessed the gun as Assualt Rifle AS VAL, as it looks awfully similar to the Modern Warfare’s “As Val”. In Modern Warfare, the guns come with an attached suppressor and a 20 bullet magazine size. The gun can be equipped with a sniper scope or a magazine upgrade to 30 bullets.

The day before the gun teaser, Activision had also revealed the new COD: Mobile map — Shoot House, a map from Modern Warfare coming with the season two update. Season 2 is expected to go live on March 10th and till then the fans can expect even more teasers about various new upcoming features. 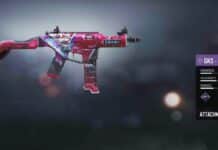 How to get GKS Kitsune Camo for free in COD Mobile?