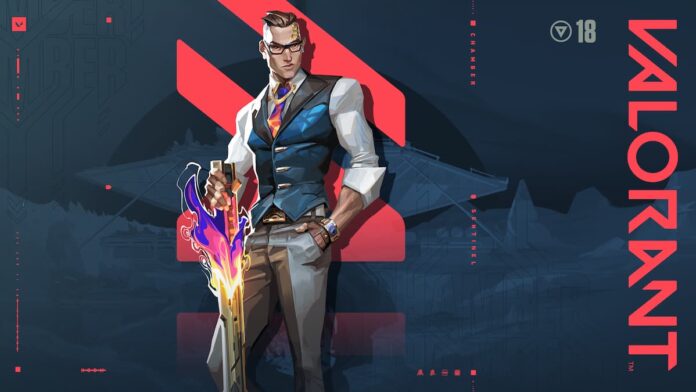 After weeks of fans clamoring with the developers of the first-person shooter game to nerf the game’s runaway favorite agent, Jeff Landa of Riot Games has released PBE nerfs to Chamber.

To a significant extent, Chamber is the most overpowered agent that Valorant has to offer; this is shown by the fact that he dominates the game’s meta in both ranked and professional play settings.

Since then, players from all around the Valorant community have been calling for more severe punishments, and we’ve heard that Riot Games has successfully tested out certain nerfs that are going to be applied across Chamber’s abilities, most notably to his Rendezvous teleport. The first set of changes are to Chamber’s signature ability, which is known as “Rendezvous,” and they have been implemented.

The base and recall cooldowns for this ability have each been increased from twenty seconds to thirty seconds, a change that represents a fifty-percent increase. The cooldown will be increased to a longer length of 45 seconds in order to account for the change that occurs when an anchor is destroyed and its radius is reduced from 21 meters to 15 meters.

As was previously indicated, the duration of the cooldown for the Chamber’s teleportation ability, Rendezvous, will be increased. The cooldown for the Rendezvous used to be 20 seconds, but it has recently been extended to 30 seconds in order to account for balance changes.

Because of this, there will be a longer interval of time between the initial setting of the teleport and the point at which it can be utilized again. Additionally, the range of Chamber’s teleport has been expanded to a larger radius. The distance he is able to teleport is drastically reduced as a consequence of the drop in range from 21 meters to 15 meters.

The most recent patch, which highlighted the nerfs that will be applied to the game, may have caused Chamber’s Rendezvous to suffer a reduction in both the scope of his ability and the number of times it can be used.

The developers at Riot have made adjustments to all of Chamber’s abilities, including the number of points required to charge his ultimate ability, the cost of each Headhunter bullet, and, of course, the amount of time it takes for his teleport ability to cool down after being used.

Since his entrance in November 2021, he has established himself as a comfortable favorite in terms of pick rate and win rate, particularly in the most recent Masters Copenhagen event. In particular, his win rate has been extremely impressive. This is especially due to the fact that he has a high percentage of victories overall.

- Advertisement -
Share
Facebook
Twitter
Pinterest
WhatsApp
Previous article
CSGO Banned In Indonesia After Steam Services Were Restricted In The Country
Next article
Where to find Boogie Bombs in Fortnite and how to use them?