Is Halo Infinite getting a Battle Royale Mode?

A potential Battle-royale is being set up for Halo : Infinite amid leaks and rumors from data miners and Dr Disrespect himself.

The long-awaited arrival of Halo : Infinite Season 2 seemingly won’t attract players from across the globe as a massive part of the community have already engaged themselves to either Apex Legends or Warzone with this highly anticipated Battle Royale mode of Halo : Infinite expected to turn the tables.

Halo Infinite during its launch had undoubtedly revived the arcade games with a unique blend of game modes like Slayer, Capture the flag (CTF), Oddball and Total Control.

With the newly rumored Battle Royale, Halo Infinite will likely compete with other BR titles who have already established their long-term effect on the player-base, most notably PlayerUnknown’s Battlegrounds : PC and Call of Duty : Warzone.

With already being said above, leaks do suggest that Halo : Infinite’s partners at Certain Affinity who have been lent a helping hand towards the overall development of the game are working on a new project, codenamed “Tatanka”.

Tatanka is a wrestler who basically won a 40-man battle royale tournament, which indeed does suggest that there could be a possible Battle Royale feature in the Halo : Infinite Universe. 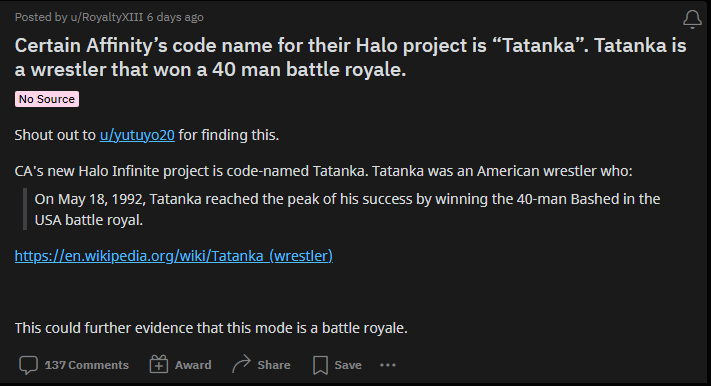 As per a report from data miner Infiniteleaks, the strings of Halo Infinite’s Battle Royale source code do reveal a plethora of settings and features including drop pods, containment zones, reviving knocked players along with the downed players bleeding out if not helped within a certain period.

How to update PS5 Dualsense via PC

PGL to host the next Dota 2 Major in Arlington, Texas