The new map Pearl will be released shortly, and it is one of the most simplistic maps in Valorant ever. Without the signature teleporters, ropeways the map follows a very traditional approach. But it would be wrong to say that the map would be easy. It is one of the most strategically demanding maps of Valorant and would require all team members to play together to get that W.

Looking at the map’s structure, As an attacker, you would need to coordinate your utilities to get into the site and plant. One such most crucial role is of a controller, A controller help to block out certain angles while you attack. Pearl being the map it is, a controller’s role would be crucial.

With Pearl being an open map and one site having two entries, it would be fascinating to see what agents people use for attacks. Astra with the Gravitational pull, Nova pulse, Nebula and Dissipate would be an excellent addition for taking map control.

With the map’s size, using two controllers would be a great choice, and Astra is one of them that can help take map control much of efficiently. 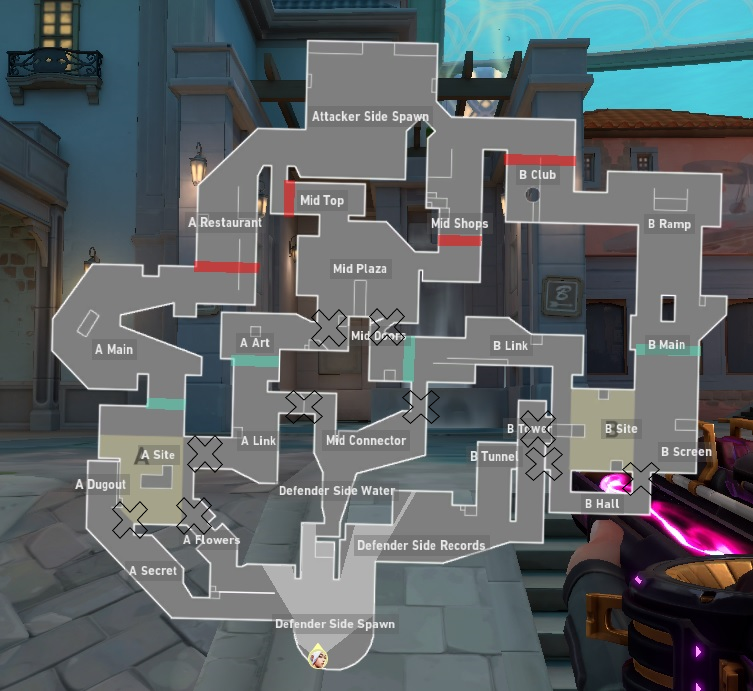 The Cross marks in the map above, show you the smoke positions for multiple attack strategies,

Lets consider you taking A,

You’d, in this case, have two primary ways. One is through mid, the other through A main. When you are directly rushing A without contesting for Mid, You can smoke the marks near A-Main, A Flowers and A Secret, While concussing A Dugout with Astra’s Nova Pulse or using Brimstone’s Molly to clear out A Dugout.

Through mid, you’d have to smoke Mid Doors for taking A while Using utilities to push the player away from A Art. While going towards the site, One has to take care of the Mid Connector player, and using Astra’s Disippate, in this case, would help. Now on-site, you have to smoke A Secret and A Flowers while carefully clearing out the angles.

A good suggestion would be splitting attackers through A-Main and mid to ensure no corners are unturned.

There’re again two entries to the site, One through mid, another through B-Main. While using B main only, there’d be only three smokes you’d have to deploy, One in the window of B tower, While the subsequent two blocking B Halls and B tunnels.

The tricky part would be taking care of the corners in B Main, B screen and B hall, where a lot of utility is required to flush out the hidden players.

Through Mid, You’d smoke A Art this time instead. While using the utilities to push back the Mid Doors player, B Link is pretty tricky, and one must be careful of Mid Connector while passing through. Now onto the site, you’d have to Smoke, Tower, Tunnel and hall again.

It would also be essential to take care of flanks and use the utility efficiently, as most utilities are one-time use.

On Defense, If you are playing inside the site, You should smoke, A Main and A link, and playing from Behind the A site would garner the required value.

Playing on B smoking the exit of B Club helps you aggress and take active map control on B, but one needs to be aware of a pop flash. While playing from the B site, the Smoking B-link would be enough. 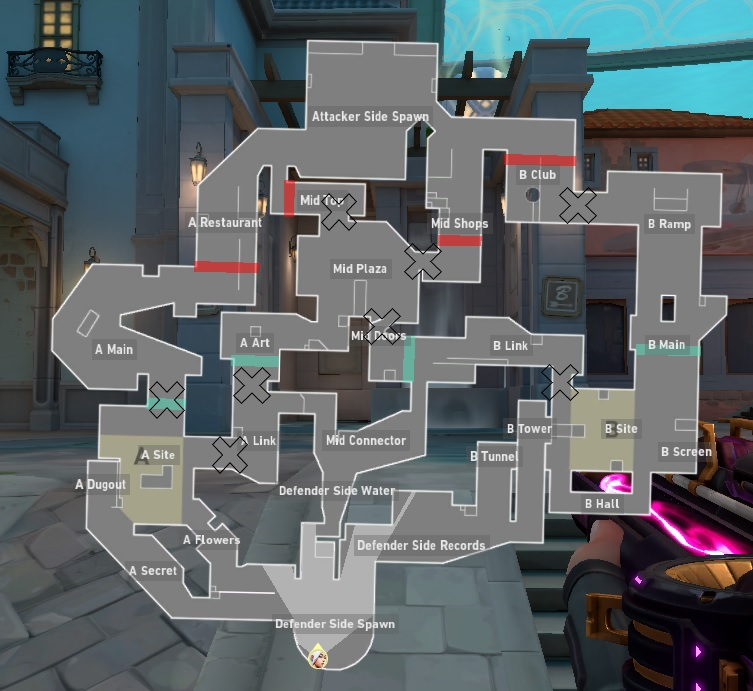 While playing Mid from the front, depending on the position, you should smoke Mid Top or Mid Shops. If you are playing A Art, Smoking Mid Shops would not be efficient as both Mid Plaza ensures your safety for direct contact, and smoking Mid Top would be crucial in blocking the attacker’s vision.

The map indeed calls for running multiple controllers or sentinels, especially since there is active flanking potential.

Running Astra/Brimstone, Brimstone/Omen, Astra/Omen would garner a lot of value. As the map gives an advantage on the defensive side, Playing two controllers would be much more efficient than playing two sentinels, saying that playing double Sentinel also makes sense.

A good duelist on this map would surely be Raze. With her utilities, she can flush out players.

But the most critical way to win this map would be through communications. Speaking Esports-wise, The map would side the teams with effective communication and teamwork