The CS:GO world awaits the year’s conclusion with bated breath as the fans bear witness to the creation of a new dynasty. Will the new dominant force’s grip extend towards the year’s upcoming pinnacle event, BLAST Premier: World Final 2021? Their track record in 2021’s CS:GO tournaments answers for them: it’s very likely.

As the 2021 professional season is coming to an end soon, there are still battles yet unfought. Among the list of next CS:GO tournaments, the BLAST Premier: World Final towers over the competition with its $1 000 000 in the prize pool and, most importantly, the big names of its attendees. Astralis, Heroic, Natus Vincere, Team Vitality, Ninjas in Pyjamas, Team Liquid, Gambit Esports, and G2 Esports are all preparing for the year’s final showdown.

As the eight competitors approach the ultimate CS:GO tourney of the year, one stands above the rest. Ushering a new era of Counter-Strike with an undisputable show of force, Natus Vincere establish a new dynasty on the Counter-Strike pro scene. May their reign be long and games bountiful for memorable moments and excellent highlights!

The battle drums of BLAST Premiere: Fall Finals are silent, and the gold and black champions emerge as the new dominant force on the CS esports scene. Indeed, 2021 has been a good year for the CIS-based team: in a flash of excellence, the squad impressively claimed not one, not even two, but astonishing eight golds in S-tier CS:GO leagues, both online and offline, in a single season. And they’re looking for more!

However, a dynasty is not defined by its past alone – its future is what makes it one. The Fall Finals had the entire team working together in unison, spelling doom for their opposition in the upcoming BLAST Premier: World Final 2021 series, but great news for their fans! We can safely say that for Natus Vincere, the future looks bright.

First in, last out

It’s no surprise to anyone to see Oleksandr “s1mple” Kostyliev win his 7th MVP badge of the year. The Ukrainian icon of consistency is now tied with dev1ce in this field, with yet one more chance to overtake the Danish legend in the upcoming BLAST Worlds. To put things into perspective: the fall CS:GO tourney marks the 85th (!) championship where s1mple maintained a positive KDA in a row.

What makes it even more impressive is the feat of mental fortitude required to achieve even half of such a result. Witnessing NaVi’s dominant performance in this year’s CS:GO tournaments, it’s simple to forget that things haven’t always been this way. There have been highs, and there have been lows for the CIS squad, but one thing always rallied them forward – s1mple’s example. For NaVi’s 5-year veteran, hard work pays off.

An heir to the throne

In a stroke of blinding awesomeness, the young Ukrainian player Valerii “b1t” Vakhovskyi makes the most explosive professional debut in the game’s history. Raking in over $750 000 in winnings after winning eight S-tier CS:GO leagues in a year and standing equal to the greatest Counter-Strike player of all time, the 18-year-old Ukrainian is living every CS:GO player’s dream.

The mechanical prodigy sports the fastest reaction time (measured in Time To Damage) while simultaneously maintaining the highest Headshot ratio on the scene at a whopping 69%. It is safe to say that b1t is an inspiration to many young CS:GO players and the living proof of such success is possible.

Gone are the days when s1mple was the only driving force of Natus Vincere. Rallied behind the team’s star player, Denis “electronic” Sharipov strikes fear into NaVi’s opposition.

And their fear is entirely rational: the way the Russian player decimated Team Vitality’s ranks in the BLAST Premier Fall Finals semi-final with an impressive 107 ADR and nearly 2.0 KDA would make anyone think twice before pushing into a site guarded by him.

Electronic about to ruin Team Vitality’s day with his brilliant Five-Seven force-buy triple in the Blast Fall Finals 2021 Grand Final.

Rated as the third greatest Major player of all time, Electronic is the most solid backbone NaVi could ever ask for.

The support’s role is often overlooked. Although the reason for this is understandable as flashy plays and big clutches ring in eternity, a good flashbang and a timely info’s importance is what really makes a good team into the reigning champions. NaVi, however, realizes this to the fullest extent as Ilya “Perfecto” Zalutskiy’s support skills are celebrated after every map. Sporting the highest KAST (Kill, Assist, Survival, or Trade) stat among the A-tier team players, Perfecto gently guides his opponents to oblivion. 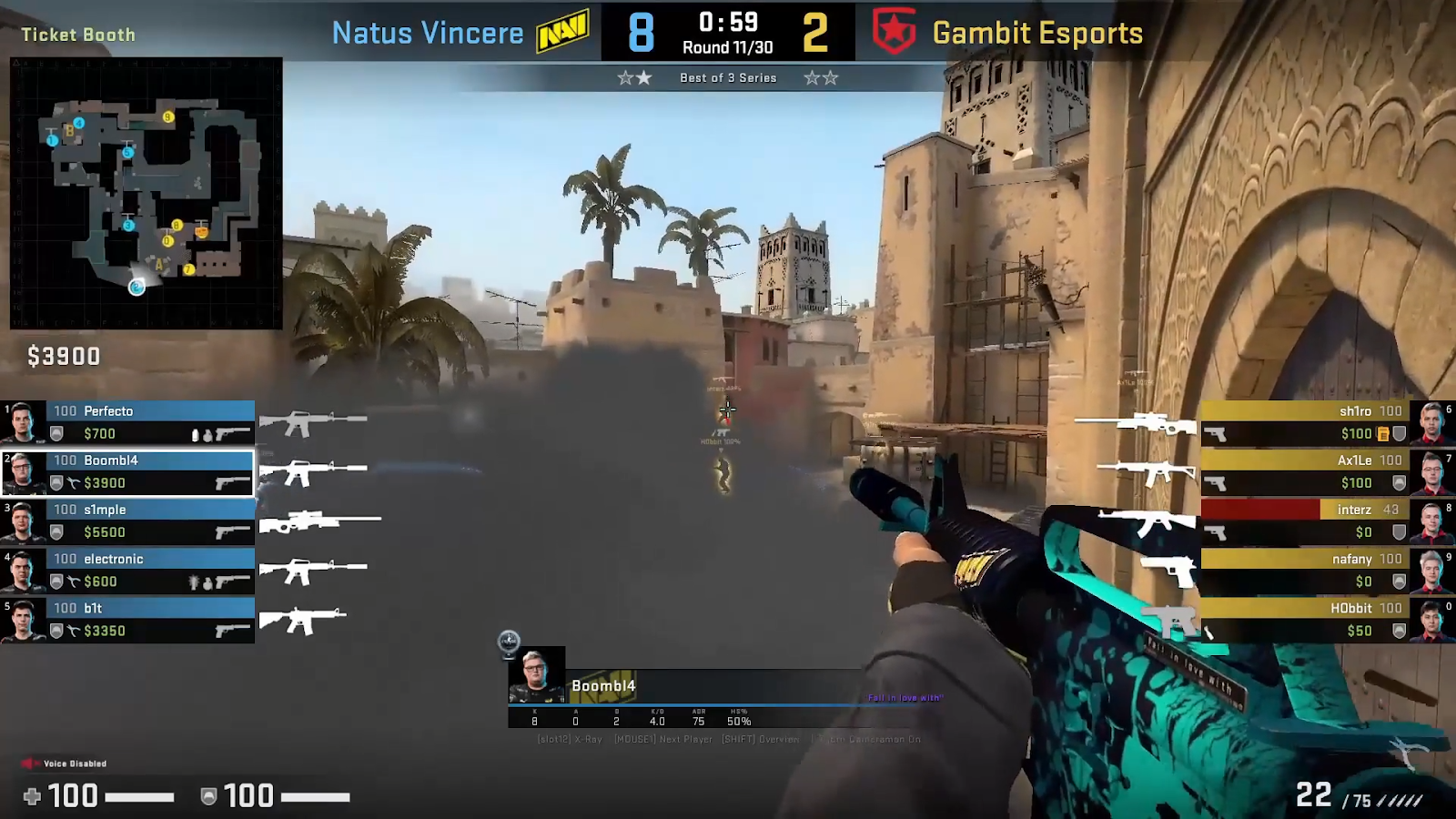 NaVi’s IGL pulling off a sneaky one-way smoke vs Gambit during the PGL Major 2021.

The squad’s in-game leader Kirill “Boombl4” Mikhaylov is full of tricks and tactics propelling his team to victory. The Russian player has proven himself as one of the most capable IGLs over this year’s CS:GO events time and time again. However, him being brains doesn’t mean he’s got no brawn: on the last map of the BLAST Premier: Fall Finals, Boombl4 massively stepped up to score a solid 97.2 ADR, scoring an impressive 1.32 HLTV rating, nailing Team Vitality’s coffin shut with his performance.

Signs of what is to come?

At its heart, Counter-Strike: Global Offensive has always been a team-based game. No amount of mechanical prowess can let even the most outstanding players win alone. For Natus Vincere, this is no longer of concern as of 2021. The squad moves as one, all five players working together like a well-oiled machine.

Closing out Fall with yet another incredible performance, NaVi shows no sign of slowing down as they barrel through towards the CS:GO centerpiece tournament. Will they finally meet their match? Only time can truly tell, but so far, there is little reason to believe they will.

Fortnite has collaborated with Discord recently. As a result, the developers introduced the Paradise Discord Quest in Chapter 3...

Muffinloop and Friends have emerged victorious at the AMD Skyesports Luna Season 2 after an intense five days of...

Valve has released a small but important update for CSGO. The new version 1.38.4.4 update brings several changes to...

As the real-world Formula 1 season continues at an accelerated pace while it is expected that the F1 Esports...

Over the past few days, several leaks have surfaced on the internet that directly hint towards the Source 2...

S1mple: “It’s not the time to leave the team”

After CEO Denying the rumors that s1mple and Egor...

Team LDLC shuts down both Blue and White squads

Team LDLC.com have closed down their White and Blue CS:GO...
- Advertisement -

Valve has released a small but important update for...
News

The Valorant Night Market is a great way for...
News

The PMPL Thailand Fall 2022 champions, The Infinity has...
News