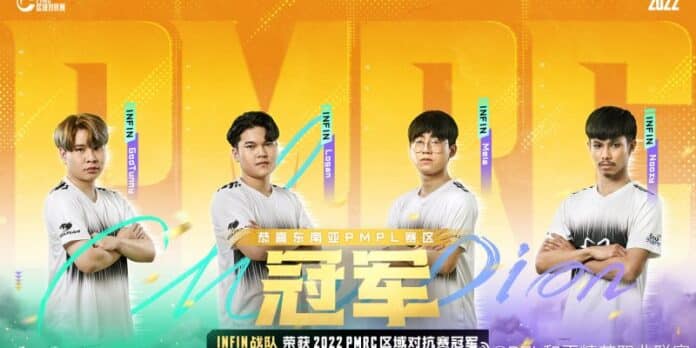 The PMPL Thailand Fall 2022 champions, The Infinity has once again won the major PUBG Mobile esports tournament. The team became the winner of the PUBG Mobile Regional Clash (PMRC) 2022.

The first one-of-its-kind event in the PUBG Mobile Esports ecosystem is going on where the top teams from China and Southeast Asia regions are competing with each other. PUBG Mobile Regional Clash (PMRC) 2022 is a tournament series featuring multiple regions. The first iteration is taking place between China and SEA teams.

The PMGC champions, Nova Esports finished at the second spot. The team had a good chance to grab the number one spot but The Infinity did a drop clash with Nova Esports and wiped out the team in the early minutes. Thus, confirming their top spot on the overall leaderboard.

nOOzy from The Infinity won the FMVP award along with $1000 USD. While Still Moving Under Fire won the only show match.