Summer Game Fest: The Last of Us Part 1 Remake comes out on September 2 for PS5, soon on PC 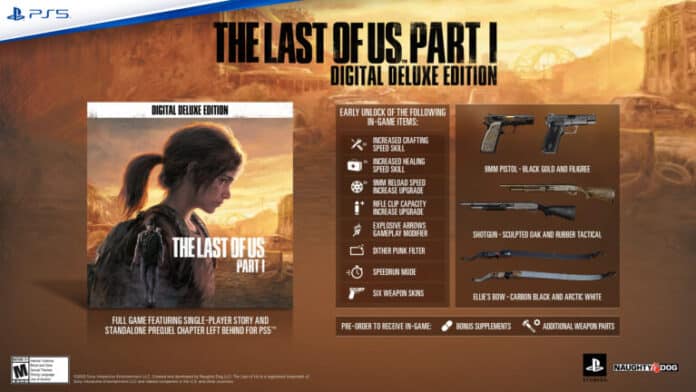 A re-worked iteration of the first game in The Last of Us series has been revealed at the Summer Game Fest which has been lined up for the September release later this year. The Remake would be a PlayStation 5 exclusive.

The Last of Us is a survival and action-adventure game series set in the post-apocalyptic United States. With almost a decade since its release, Naughty Dog are back again with a graphical remake of the game which holds massive changes in terms of the character models including a revamped new enemy AI with enhanced combat options as compared to The Last of Us Part 2.

The Last of Us Part 1 remake will feature two editions of the game for the PlayStation 5 namely the Digital Deluxe Edition and a “Firefly Edition”.

The Digital Deluxe includes an early unlock of the following in-game items:

The Firefly edition would have a steel book case with a full game featuring single-player and standalone prequel chapter Left Behind for PS5 alongside all the rewards from the Deluxe Edition.

Pre-ordering either of the above edition’s for your PlayStation 5 would give you get you the following in-game items:

In addition to the above, a PC version of The Last of Us Part 1 Remake has also been revealed to be in the works and more information on the same will be shared by Naughty Dog after the launch of the game’s PS5 version.