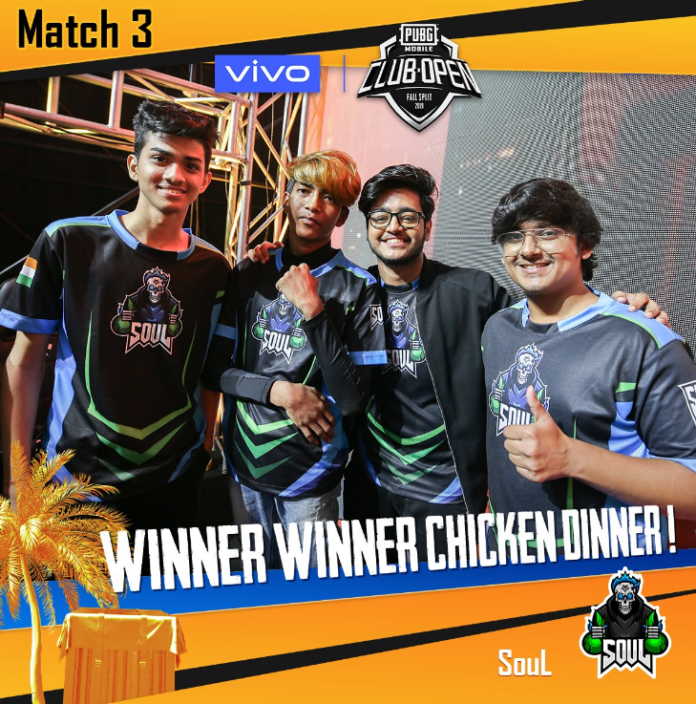 Day 1 at PMCO 2019 Global Finals in Kuala Lumpur, Malaysia has come to an end after 4 carnage filled exhilarating matches. The Hindi Stream matches were casted by India finest, 8BitThug, Krat and Ocean. The Hindi Stream had a concurrent viewership of 120,000 and the chat section was filled with supportive messages for our homegrown heroes, Entity Gaming and Team Soul.

Game 1 was dominated by Bigetron’s Luxyy who carried his team to victory after winning a 1v2v2 clutch against Top esports and ARW. The map was Sanhok, the most exciting and fast paced map out of the entire pool although we saw no action till the 13th minute of the game. Team Soul was handed over an early exit at position 15 by Team EGC. Team Soul managed to get no kills in Sanhok and later on, Entity was eliminated at position 9. Mega esports, the Preliminary round winners made an exit at position 6 and North American representatives Cloud 9 made it to position 4. The final battle was a triple squad standoff where Luxyy, the star player of Bigetron managed to outplay the remaining duos from Top esports and ARW, claiming the Chicken Dinner.

Game 2 took us to the desert of Miramar, the glorious land of snipers and open vast lands perfect for ambushes and vehicular warfare. Everything went wrong for Team Soul when Mortal was the first man to be killed, merely minuted into the match. Previous year’s winning team, Top Esports were the first squad to be eliminated by Mega Esports who owned them in a post zone crossfire. Team Soul followed an early exit at Position 13 losing a gun fight to Unicorns. Entity’s Ghatak made a grave mistake by over committing for a kill costing his life, leaving Neyooo, Aman and Jonathan without a captain in action. Entity although, with an impressive run made it to a final standoff against Illuminate the Murder where they managed to come in 2nd bagging 24 points with 10 kills. Here’s the point table after Game 2:

Game 3 is where the sleeping giant was finally awakened. Vikendi, the frozen battleground hosted some early game action with Soul Mortal grabbing first blood vs Mega Esports. Entity got an early advantage with Jonathan slyly looting an air drop with level 3 gear and an Awp. Things soon went wrong for them as Aman and Ghatak were downed by RRQ AThena leaving the remaining two players surrounded by Illuminate. Entity eventually took a 16th position exit, the very first team to leave the game. Team Soul made their way to Villa and established a stronghold there which no team was willing to contest early on. Mega esports took down Unicorns and made their way to the central zone. The 6th zone developed a 5 squad standoff near Villa where Team Soul was safely camping inside, exhibiting some smart gameplay and letting the other teams fight. Team Queso came by and were caught against team Soul where ClutchGod braved a 1v3 wiping TQ. The winning moment was a healing battle against team Unique as the final zone had collapsed. Soul Mortal outplayed UniqOldBoy claiming the Chicken Dinner for his team.

Game 4 was played on Erangel where Cloud9 took a position 15 exit with Team Soul following at pos. 12 after losing a gunfight to Illuminate. Erangel being a large map, teams engaged less into fights and more into looting and position to gain a late game advantage. At the 6th circle, Entity decimated unicorn gaming tying the kill score with Bigetron at 8 kills. Top esports got out at position 7 leaving the two brothers, Luxyy and Zuxxy of Bigetron in a standoff with Entity. Ghatak rushed into the fight and got picked off by Luxy but Entity took out Bigetron in a 3v1 fight. The final fight was a three way duel between Entity, Team Queso and Illuminate. Team Queso emerged victorious and Entity bagged second place with an impressive 11 kills and key player award bagged by Jonathan. This was the second time Entity placed 2nd in a match giving them a fair point advantage.

The final points table after day 1 was as follows:

Tomorrow morning will mark the beginning of day 2 where a total of 6 matches will be played. We congratulate both Team Soul and Entity Gaming for a brilliant performance today and we wish them best of luck for tomorrow.