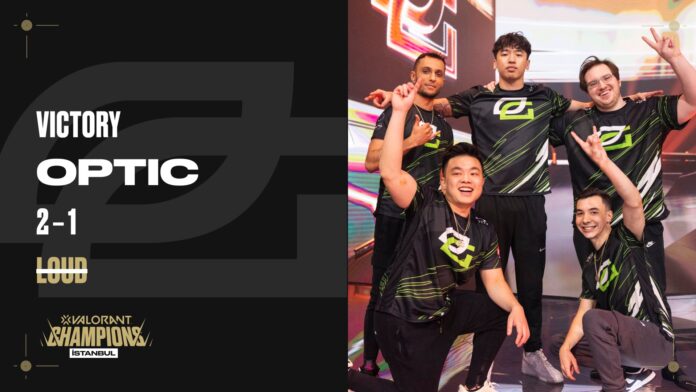 On the third day of Valorant Champions 2022, betted The Korean Super Team DRX against the Brazilian Furia, followed by 100 Thieves taking on Fnatic, followed by the Group B qualifiers between Optic Gaming and LOUD.

The first match of Group D had the Korean giants DRX taking on the South America LCQ winners Furia, with the series starting on Furia’s map pick on Ascent.

The map started with Furia taking complete control over DRX reading the attack perfectly to win eight rounds in a row. DRX, with their plays, managed to scrape three rounds in half to finish the half 3-9.

The second half started with Furia clutching the pistol round and the follow-up to winning the first gun round reaching map point before DRX can win five rounds. With a scoreline of 12-4, DRX displayed their determination winning eight rounds in a row to force overtime.

The overtime had both teams winning offensive and defensive halves to reach 14-14, but DRX, with their strategic offense, won the first round of third OT and held strong to complete one of the best comebacks in professional Valorant history, winning the first map 16-14.

The second map Haven started with DRX completely dominating Furia, winning seven out of the eight rounds. Furia scraped three rounds by the end of the half to finish the half on 4-8.

The domination continued on the attack for DRX, and they closed out the map without dropping another round to win the map 13-4.

With the map win, DRX 2-0’d after a successful comeback on Ascent to conclude the amazing series with a solid W. DRX now plays the winner of Fnatic/100t while Furia faces elimination.

The NA LCQ winners looked good in the tournament, but their first challenge was against the EMEA giants Fnatic. The match was a trial by fire for the new and improved 100 Thieves as they made their international debut.

The three-map series started on Pearl, chosen by Fnatic. Still, it seemed 100 Thieves had everything in control, winning four out of the first five rounds, but Fnatic’s resilience helped them finish the first half on a 6-6 half.

The second half started with Fnatic losing the first two rounds but winning the anti-bonus. But 100 Thieves’ attack overwhelmed the defense and limited Fnatic to only four rounds before winning the game 13-10.

With 0-1 down, Fnatic needed to win the second map to force the third map, and they started strong, winning eight out of the first ten rounds, but a clutch from Bang to secure the third and fourth rounds.

The second half started in Fnatic’s favor, and they managed to convert the game, winning the required five rounds with relative ease to close the map 13-7 to force the third map.

100T on attack completely decimated the Fnatic defense, winning the required seven rounds, dropping only one to close the map 13-7 to win the series 2-1.

The Group B upper bracket qualifier was a rematch of the VCT Masters Reykjavik finals, with the two teams, Optic Gaming and LOUD, facing each other for the fifth time.

This iteration had LOUD started on defense on their map pick Breeze and completely dominated Optic Gaming reading their attacks like a book to close out the half 11-1.

Optic on defense displayed why they are the top team in the game, winning six rounds in a row, but the ten-round deficit was too much for Optic, and they lost the game 7-13, going a map down in the series.

Fracture started with Optic Gaming winning the opening two rounds, but LOUD, on the back of a strong performance from Sacy, secured five straight rounds. Still, Optic Gaming and spearheaded by Yay, secured four out of the final five rounds to equalize the half.

The second half seemed to be going in LOUD’s favor, but a strong performance from Yay helped Optic to bring back Optic to winning ways to close the map 13-10 to force a third map.

Pearl started with LOUD winning the first two rounds, but Optic finally found their rhythm and completely shut down all of LOUD’s offense to close the first half 9-3.

The second half started with Optic winning the required four rounds without dropping a beat to close the map 13-3 and the series 2-1 to qualify for their first Valorant Champions playoff.