100 Thieves might have some competition as TSM announced that their new gaming facility that is worth $50 million is all set to open in the spring of 2020. Leena Xu, the president of TSM esports and Content Creator, Myth gave TSM fans a sneak peek of the org’s new gaming facility that could undoubtedly be the biggest largest esport centre ever created in North America.

The facility boasts of 25,000 square feet and is scheduled to open in the spring of 2020. The interior of TSM’s gaming facility is all painted in black and white and feature a lot of space for TSM’s employees. The gaming facility also features a closed theatre with bleaches that will allow the org to hold seminars and meetings & to also host launch parties for esport events.

League of Legends pro player for TSM, Bjergsen has also put his own touch to the facility while requesting for a sensory deprivation tank for the players to float in for meditation sessions. The Wellness Centre will also comprise nap pods for employees and streamers in order to take breaks. (pretty dope right?)

For the esports team, the entire upstairs area has been allotted. The area includes lounges for preparation and coaching, scrim rooms, streaming setups, a cafe, fitness centre and a green screen area for content creation. TSM’s gaming facility is all set to compete with 100 Thieves $35 million Clash App Compound which opened in the starting of this year for their employees, staff, streamers, content creators and their pro players. 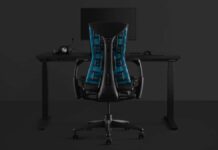